The best travel tips for the Seychelles island of Praslin

travel tips for the Seychelles island of Praslin 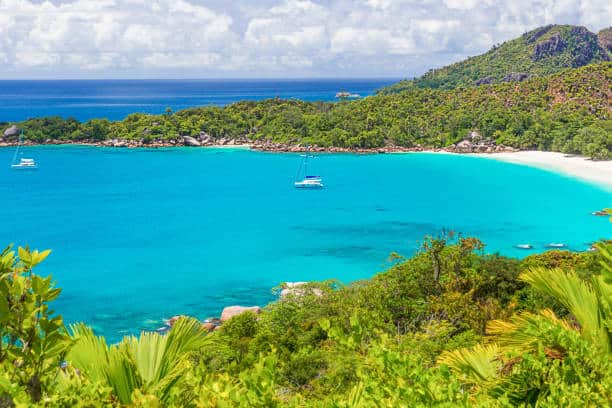 The Seychelles island of Praslin is best known for its dream beaches. In addition, the island, located in the Indian Ocean off the east coast of Africa, has even more to offer tourists.

As soon as it is in the air, the small Air Seychelles plane descends again for the landing approach – it only takes half an hour for the route between Mahé and Praslin. But enough time to get a tiny bit of flight sickness, because the planes with only about 20 seats take every gust of wind with them. Of course, the pilot doesn’t mind. He lands the propeller plane on the airfield with sleepwalking certainty.

About 50 kilometers of sea lie between the largest Seychelles island of Mahé and Praslin, which is only twelve kilometers long and five kilometers wide and the second largest island in the archipelago. With this expansion, it makes almost 40 square kilometers of tropical paradise, where only about 7000 people live. Reason enough to take a look at Praslin.

Sights and beaches on Praslin

The most famous sight of the mountainous island of Praslin, covered by dense tropical forest, is the Vallée de Mai, a grandiose nature reserve that was declared a World Heritage Site by Unesco. The lush jungle is home to rare animals such as the bristle hedgehog (tenrec) – and the coco de mer, the world-famous Seychelles palm, whose huge fruits resemble a female pelvis.

Despite their name, coconuts do not come from the sea. They owe their name to the fact that, in the past, their mighty fruits were often found on the beach and it was assumed that the trees grew on the seabed. This and its bizarre shape made the Coco de Mer a legend.

Anyone who comes to the beaches of Praslin today will probably not find a coco de mer. But the most wonderful powder sand, rounded granite rocks and turquoise water that competes with the blue of the sky. It is all the more surprising that the beaches are rarely overcrowded. And that, although Praslin has two of the most beautiful beaches in the world with the two bays Anse Lazio and Anse Kerlan. If you want to visit Anse Lazio, you have to fight your way: 350 meters of difference in altitude have to be overcome.

The other beaches on Praslin are also attractive. Anse Takamaka, for example, or Anse Possession, so called because on November 20, 1768, the French lieutenant Lampériaire rammed the French flag into the sand and planted a stone – as a sign of the French taking possession. Or Anse Marie-Louise, secluded on the eastern tip of Praslin. A steep road has to be overcome before you can throw yourself into the water. The beaches at Anse Volbert and Grand Anse are larger and more crowded. But even here you can easily find shady spots with sufficient distance to the neighbors.

Crabs scurrying on the beach

Praslin’s funniest denizens – along with the tenrecs of the Vallée de Mai – are the crabs, which ruffle the powder-soft sand on the beaches but seem to have a very obvious dislike for humans. As soon as a biped approaches, they dart into their holes. But because they are very curious about it, it only takes a while before they come out again. Only to run away again a little later with strange movements.

Also some islands belong to Praslin. They look a lot like what you imagine the place where Robinson Crusoe was stranded. Curieuse, for example, which is a kilometer from Praslin but is almost uninhabited. Leprosy patients used to live on the island, but today turtles are being researched there. There are no roads, neither are there hotels, but there are a few specimens of the Coco de Mer. Curieuse, like the tiny Île St. Pierre, is part of the Curieuse Marine National Park.

On the other side of Praslin, clearly visible from Anse Kerlan, are the islands of Cousin and Cousine shimmering in the sun. The former is the more famous – it is a sanctuary for rare animals and plants. It was placed under protection in 1968 when the almost extinct Seychelles reed warbler was discovered there. Today about 300 of the animals live there again, as well as the white-tailed tropicbird with its long tail and a wingspan of 95 centimetres, the sooty noddy tern and the snow-white fairy tern, which really lives up to its name.

You can enter Cousin, but only as part of a guided tour. Some tour operators have a day trip to Cousin in their program.

The neighboring island of Cousine was once settled by French colonizers, who thoughtlessly brought their pets with them. This had fatal consequences: the native animal species were wiped out, and the new inhabitants also destroyed the plant diversity by cultivating tobacco and coconut palms. In 1992, a South African businessman bought the island and began restoring it. Many animal species returned or were reintroduced. A few specimens of the mighty Seychelles giant tortoise also live on Cousine. The renaturation project is financed by a luxury bungalow complex for eight guests.

Praslin’s main town is Baie Sainte Anne, which lies in a natural harbor on the east of the island and consists of little more than a handful of houses. Ferries depart from the port in Baie Sainte Anne to the equally popular Seychelles island of La Digue. Mahé can also be reached from there by fast ferry.

Note: Information on entry requirements and the current corona situation in the Seychelles can be found on the website of the Federal Foreign Office .