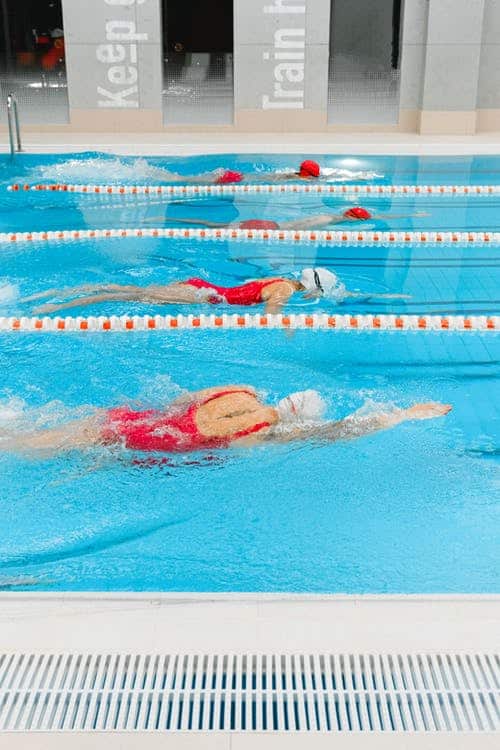 A new superlative pool has opened in Dubai. The “Aura Skypool” is the highest 360 degree infinity pool in the world.

In Dubai, a rooftop pool has opened on the Palm Jumeirah that’s not for the faint of heart. On the 52nd floor of the Palm Tower, which also houses a luxury hotel and condominiums, is an infinity pool that wraps around the entire top of the building. You can swim and splash in the pool at a height of 200 meters, which makes it the highest 360-degree infinity pool in the world.

Some have been meticulously planned by architects, others shaped by nature over centuries, but they all have one thing in common: most people love to spend time in them. We’re talking about pools. But which one is the biggest? And which is the most dangerous? These are the pools of superlatives.

The highest 360 degree infinity pool in the world

Dubai has a new attraction that packs a punch: the Aura Skypool, which wraps around the top of the Palm Tower on the man-made island, The Palm Jumeirah. The special thing about the location on the island, which was heaped up off the coast of Dubai a good 20 years ago, is the view of the Dubai Marina district with its high-rise buildings. Guests have to pay 16.50 euros, then they can enjoy the view from the highest 360-degree infinity pool in the world. The tallest tower in the world, the Burj Khalifa, can also be admired from there. You can swim in the super pool with an area of ​​750 square meters from 10 a.m. to sunset.

The tallest infinity pool in the world

Dubai can boast of superlatives: the Address Beach Resort is even higher than the Aura Skypool, the highest 360-degree infinity pool in the world. On the roof of the resort is an infinity pool at a height of 293.90 meters, which was included in the Guinness Book of Records . Previously, the infinity pool on the 191 meter high hotel roof at Marina Bay Sands in Singapore held the title of “world’s tallest pool”.

It was only in May of this year that the so-called “Sky Pool” opened in London – a 25-metre-long, transparent swimming pool that extends between the tenth floors of two high-rise residential buildings in the south-west of the metropolis in the Nine Elms district. According to a report by CNNIt is the largest free-floating acrylic pool structure in the world. The Sky Pool is the centerpiece of a new building and park complex close to the South Bank of the River Thames, which also includes bars, restaurants and shops. The area was designed by the architecture firm EcoWorld Ballymore. From the pool, bathers can enjoy views of the London skyline, including the London Eye and Westminster Abbey. A small downside: access to the pool is reserved for the residents of the apartment complex.

The largest pool in the world

The largest pool in the world is in Chile. The San Alfonso del Mar resort includes a pool that could almost pass as a small sea: more than a kilometer long and up to 3.5 meters deep, you sometimes forget that you are only in a pool. The fact that even small boats swim in the 250 million liter pool underlines this picture. And if you want to learn windsurfing etc. but are afraid of sharks and orcas, you can of course do it very easily in the largest pool in the world.

The deepest pool in the world

One of the superlative pools is definitely “Deepspot” in Poland. This 45.5 meter deep plunge pool was opened in Mszczonow, 50 kilometers from Warsaw. You can find out more about the deepest pool on earth  here . Incidentally, Italy previously held the title.

The most dangerous pool in the world

Dangerous in a different way is the Devil’s Pool . Directly in front of a roaring waterfall in Zambia, you can only get into the water reasonably safely in the dry season from September to December. And even then, be careful! Because behind the pool it goes down 110 meters. Tourists should only explore the pool with a tour guide to avoid accidentally stepping into the water in the wrong place.

The pool with the most floors

The Hotel Grand Wailea  not only has the reputation of having one of the most beautiful pool areas in Hawaii. The Wailea Canyon Activity Pool extends over six floors. The total of nine pools are connected by a river and have a lot to offer especially for water adventurers: there are numerous caves, waterfalls, lianas and slides to discover. And then there’s the world’s first pool elevator, which allows visitors to move from floor to floor.

The most hidden pool in the world

In the Homestead Crater in Utah you can swim in a 16 meter deep cave. Formed by melting ice over more than 10,000 years, the natural pool beneath the rock has become a gorgeous little swimming cave that attracts visitors from all over the world. There is a large hole in the stone in the center of the pool, allowing sunlight to illuminate the cave.