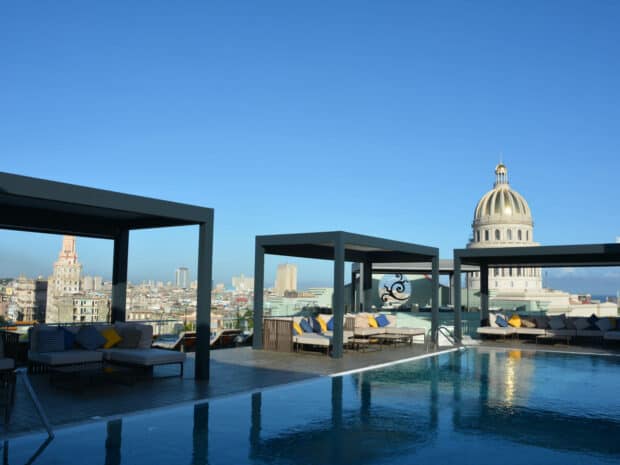 The Hotel Saratoga is situated in Old Havana, Cuba, on the Paseo Del Prado, next to the famous Fountain Of The Indians. This luxury boutique hotel offers guests a unique experience, combining modern comfort with colonial charm. Guests can enjoy our rooftop terrace, where you can take in the breathtaking views of the city while sipping on a cocktail. Our concierge team is here to assist you 24 hours a day; we are happy to arrange sightseeing tours around the city, book tickets to local attractions, reserve restaurants, and much more. We invite you to discover what makes us different. 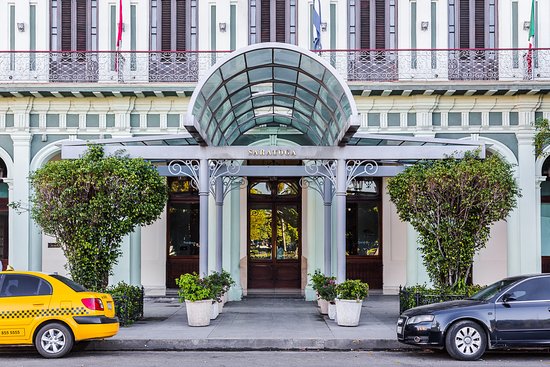 The Hotel Saratoga opened its doors in 1884. The hotel was designed by architect Juan Antonio Roca. He had been commissioned by Cuban businessman Gregorio Palacios y Perez. The hotel was built next to the Plaza de Armas, where the National Palace now stands.

Originally, the hotel consisted of three stories; however, in 1900, the third floor was added. In 1930, the hotel was expanded again, adding a fourth story. A swimming pool was installed in 1938.

In 1945, the hotel became part of the Gran Caribe chain. After Fidel Castro came into power, he nationalized many hotels. The hotel was renamed La Habana Hilton.

After the fall of the Soviet Union, the hotel returned to its original name, Hotel Saratoga.

The hotel was built in 1882 under the direction of American architect Thomas Hastings. It was named after the famous racehorse “Saratoga”. In the early 1900s, the hotel was owned by John W. Hays, whose son William E. Hays operated it during the 1920s. During the 1930s, the hotel was run by the Hays family, and later sold to Cuban businessman Jose Arismendy Alfonso. He renamed the hotel “Hotel Saratoga”, and opened it to tourists in 1953.

In 1959, Fidel Castro nationalized hotels, including the Saratoga. At the time, he believed that tourism could help rebuild the economy of Cuba. However, the hotel never recovered from his decision. The hotel was used as a barracks for the Revolutionary Armed Forces (FAR). When the FAR left Havana in January 1961, many Cubans still stayed there because it was considered safe.

After the communist revolution, the hotel fell into disrepair, and was abandoned in 1963. The following year, the building was declared unsafe by the Cuban Ministry of Public Works. The building was closed down in 1965, and it remained vacant until 1977. By that time, the building was already suffering serious damage caused by hurricanes and termites.

The explosion occurred on 6 May at the Hotel Capri, located in the city centre of Palma de Mallorca, Spain. Forty-seven people died in the incident, including one Spanish tourist. A total of ninety-two people were injured, some seriously.

According to preliminary reports, the blast originated from an accidental leak of propane gas inside the basement of the hotel. The fire department stated that the explosion was caused by a sudden increase in pressure due to a malfunctioning ventilator fan.

In addition to the fatalities, many guests sustained injuries, including burns, fractures, and internal bleeding. Some victims had been trapped in their rooms since the explosion; others were rescued by firefighters.

A statement released by the local government described it as “the worst tragedy ever experienced in the history of the island”.

The Hotel Saratoga is undoubtedly one of the most outstanding hotels in Cuba, offering a unique combination of luxury and comfort. Located in the heart of Old Havana, it offers five star accommodation with excellent services and amenities, including a rooftop swimming pool and sauna, a fitness centre, a restaurant, a bar, a cigar lounge, a coffee shop, a gift shop and a room service.

Its location puts you within easy reach of many tourist attractions such as the Plaza de Armas, the Capitolio, the Cathedral of San Cristobal, the Malecon and the National Museum of Fine Arts. You are also close to several embassies and consulates, making it ideal for those planning to travel abroad.

We invite you to discover our facilities and services, and to enjoy a memorable stay in our comfortable and welcoming environment.

The Terraza Piscinas offers guests a unique experience. Located on the eighth floor of the Hotel Nacional de Cuba, it provides 360º views of Havana and the Bay of Havana. In addition, the terrace features a large swimming pool, a bar, a lounge area where you can relax while enjoying a cocktail, and a restaurant serving breakfast, lunch and dinner.

The elegant restaurant “Anacaona”, located in the Hotel Anacaona, offers a wide selection of dishes prepared by our chef, who specializes in classic Spanish cuisine and modern interpretations of traditional Cuban recipes. In addition to the dishes served daily, you can enjoy some of the best culinary creations of the world. We invite you to taste our delicious menu, where you can find everything from appetizers to desserts.

The terrace has several levels, a rectangular pool, gym and restaurant bar that offer everything from light meals such like pizzas, sandwiches, grills, to exquisite dishes of Cuban and international cuisine. Mirador Saratoga Restaurant is located in the heart of Havana, next door to the Plaza de la Revolución.

Located on the seventh floor, the Massage and Spa Salon offers a wide range of massage and spa treatment services. A unique feature of the salon is its Jacuzzi, where you can enjoy a soothing bath while being pampered. The salon also provides a wide range of beauty treatments such as facials, manicures, pedicures, hair styling, waxing, makeovers, etc.

The salon operates daily from 8 am to 11 pm.