Pizza is baked on an active volcano

Pizza is baked on an active volcano 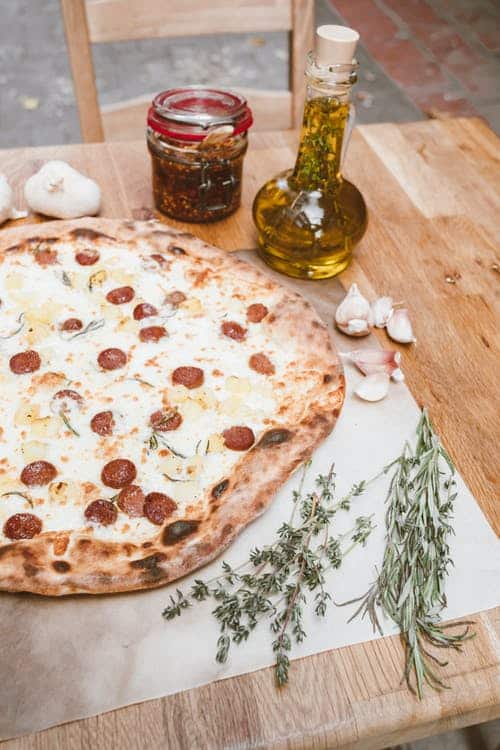 The Pacaya in Guatemala is a highly active volcano. But because the lava here usually flows very slowly, it has become a tourist hotspot. Also because there is a specialty here that is unique in the world. Because a particularly courageous local bakes pizza on the volcano.

For David García Mansilla, the day starts very early. At 5:30 a.m. to be exact. Then he shoulders his backpack, which weighs up to 30 kilograms, and sets out on the five-kilometer route to the Parque Nacional Volcán de Pacaya, near the Guatemalan city of San Vicente Pacaya. His goal here is the active Pacaya Volcano. Because this is where García Mansilla will be baking pizza, like every day for the last few years. It’s the only pizza in the world that cooks on the lava rock of an active volcano.

García Mansilla came up with the idea for his unusual pizza back in 2010, as he reveals to TRAVELBOOK. At that time, the Pacaya erupted particularly violently, even the La Aurora Airport in Guatemala City was closed. But García Mansilla soon observed how national park guides were grilling marshmallows with tourists over the glowing but very slow-flowing lava. That gave him the idea for his pizza: “I was just curious and wanted to know what you could cook on the hot lava stone. And that’s how I came up with pizza.”

David García Mansilla prepares his special pizza. Every day he carries the ingredients on his back up to the Pacaya volcano.

He experimented for six years until he was satisfied with his product. “The lava doesn’t have a button to turn the temperature up or down,” he says. But it can get hot up to 1000 degrees Celsius – a truly hellishly hot pizza oven. In 2019 he opened his business “Artes Culinarias del Pacaya”. García Mansilla used to only bake pizza for his friends, but by his own admission, demand soon exploded.

“Newspapers in more than 48 countries have reported on my pizza,” he says. “It has become so famous that I can only work with advance reservations.” Today he sells up to 35 pieces of his volcanic specialty a week. The fact that there are so few despite the enormous demand is probably also due to the price. Because per pizza 55 US dollars are due.

But the food is also truly spectacular, namely on the crater rim of the Pacaya volcano. By pre-booking, visitors ensure participation and the pizza of their choice. García Mansilla then carries the appropriate ingredients up the Feuerberg on his back. The preparation is done together. “I now have reservations from all over the world. The last tourists came from Bangladesh, India, Pakistan and South Korea,” says García Mansilla.

He often stays at the rim of the crater all day long into the night. This is anything but harmless: “Once I was almost killed by a stone the size of a car that the Pacaya spat out.” But that doesn’t stop García Mansilla from working. “If the volcano is too active, the national park will be closed to tourists. Then I go up alone to bake and deliver, so to speak.” And of course the inventor of the only Vulkan pizza in the world is very proud of his product: “There is no other like this. Baking on the lava rock gives it a unique flavor.”