Nine-euro ticket: The great train driver Rudis on the most beautiful routes 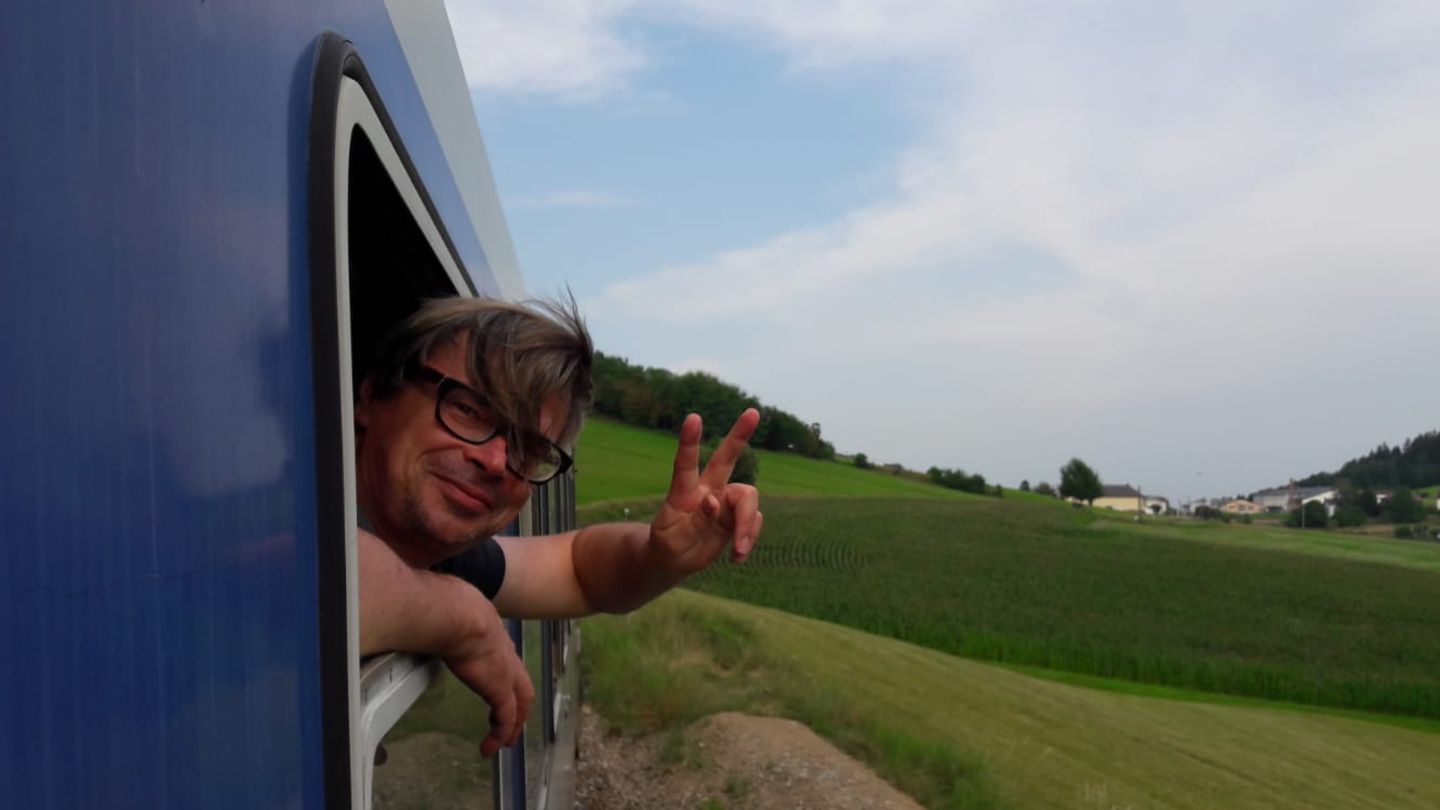 Nine-euro ticket: The great train driver Rudis on the most beautiful routes

The nine-euro ticket promises travel throughout Germany for little money. Time to talk to one of the most famous and passionate train drivers: Jaroslav Rudiš. A conversation about favorite routes, dining cars and trains of hope.

Describing Jaroslav Rudiš as a rail fan seems almost like an understatement. The author and bearer of the Federal Cross of Merit, born in Czechoslovakia in 1972, now lives in Lomnice nad Popelkou in north-eastern Bohemia and in Berlin and actually also in a third place: on the train. He has traveled almost all of Europe by train and collects stories along the way and sometimes signs copies of his “Instructions for Train Travel” in the dining car.

It is quite possible that this reading will accompany many a travel enthusiast this summer. In any case, the incentive to travel by train should come with the nine-euro ticket. Nine euros a month for three months – that’s how little buses and trains should cost for citizens throughout Germany from this June. In an interview with the, Jaroslav Rudiš says which routes are particularly worthwhile star – from Sicily to Lapland.

Mr. Rudis, You travel a lot by train and call yourself a “heavy user” of the railway. Do you have a favorite route?
I now drive the Berlin – Dresden – Prague route almost every week. It’s beautiful. I live in Berlin and in Lomnice nad Popelkou, a small town in north-eastern Bohemia, but I’m often in Berlin. If I get homesick in between, I sometimes sit on the Czech train for two hours towards Prague. That’s just enough for a meal and two or three beers in the dining car.

You’ve even become friends with Mr. Peterka, the waiter.
Yes, I just wrote to him earlier that I’ll be coming back later. He’s already reserved my seat in the dining car. I’m looking forward to. He is a wonderful conversationalist, he experiences the best stories and is also very interested in culture. It’s the many stories that make traveling by train so special.

Are there still many stories to be heard today? Isn’t everyone on the train looking at their cell phone all the time and wearing headphones?
That’s true, I myself often wear headphones when I write on the train and I write a lot on the train. But if you’re paying attention, you’ll notice a lot. There’s the politician discussing arms and gas supplies. There are the regulars, the opera singer. And there’s the junkie who says, “My character stays the same.” Of course, you have to write down such sentences. The dining car is the ideal place to find stories. It’s a democratic place. Currently, trains also tell stories of this terrible war.

Can you tell any of them?
I was traveling in Poland a few weeks ago and got into conversation with women who had fled from Odessa. And then also with people from Lviv. I don’t speak Ukrainian, but I’m lucky enough to understand it. These trains from the Ukraine with the refugees, they are trains of hope. In addition to the soldiers in Ukraine, the train drivers and dispatchers are also heroes. The train plays many important roles in this war. Weapons come with it. And there’s diplomacy on the night train. In March, the heads of government of Slovenia, the Czech Republic and Poland traveled together to Kyiv – by train. Traveling by plane would have been too dangerous.

Do you still experience great solidarity with the refugees in Poland and the Czech Republic?
In any case. The countries are closely connected. Everyone knows someone from Ukraine. In the past 20 years, many people from Ukraine have come to the Czech Republic. Although I was born in 1972 and after the Prague Spring, the images of the Russian tanks in Wenceslas Square are still engraved in my memory and now I wake up again when I see the images of the tanks in Ukraine. The brutality of this war shocks me.

In the past two months, the impression has been given that Germany is only really paying attention to the countries in Central and Eastern Europe through this brutality. How have you experienced that in recent years?
It’s true that the East is of little interest here. I often think so in the field of culture. When I look at the programs of the big German theaters in Berlin, I rarely find plays by Polish, Czech or Ukrainian authors. But there are great ones. In the Czech Republic, there has always been a certain lack of understanding of how dependent Germany has become on Russian gas. But actually the Czech Republic too.

Last year you were awarded the Federal Cross of Merit. “The Czech writer is one of the most dedicated bridge builders between Germany and the Czech Republic,” the official statement said. Do you also see yourself in this intermediary role?
I was on the train from Chiasso to Como when the call came from Bellevue Castle. In Switzerland you really have very good connections everywhere on the train, even in tunnels. But this is where the reception is really bad. I just understood the question whether I’m free on October 1st and that Frank-Walter Steinmeier would like to invite me. Then the connection was gone. Actually, I would have been at a reading that day and at first thought I couldn’t. I then had a coffee on the Italian side and called back. In the end I canceled the reading and accepted. Because of course I was very happy. It’s a very big honor.

You mentioned culture. In which areas would you like more exchange?
In the train! People should travel to the East. Prague, Kraków, Lviv – everything is so close. Just drive there! Hopefully we can go to Ukraine again soon. Take a vacation there, it’s worth it. And with the train you can also see all this wonderful landscape. When you fly, you only experience anonymous airports and have no sense of how far away or how close something is. Anyone who travels through Europe by train gets to know the similarities and differences. For me, traveling by train is a major European project. We owe our prosperity to trains. But of course I also see the suffering of the Holocaust on the rails. Railway stations are always places of farewell. All of this is included in train travel. This whole story.

You have already traveled almost all of Europe by train. You have already driven from Sicily to Lapland.
It was wonderful. At the beginning still on the ferry and then once through Europe. It gets quieter and quieter on the train. The Finns talk little. But when they say something, every sentence fits. And on the way from north to south, the espresso gets better with every stop. It’s very worth it: get off in Italy and have a coffee. Get off in the Czech Republic and have a beer. Another wonderful route is from Prague via Vienna to Ljubljana and Trieste. When you see the sea for the first time just before Trieste, it’s fantastic.

With the richly illustrated “Trieste Centrale” you even dedicated a book to this series. Their “Instructions for Traveling by Train” is a great success. You seem to have struck a chord with your enthusiasm for rail travel.
The “Instructions for Use” really speaks to a lot of different people. Again and again someone recognizes me in the dining car and asks if I can sign the book. Many railway workers have also read the book. Of course I’m particularly pleased about that.

The nine-euro ticket will soon be available in Germany. What do you make of it?
I think that’s great – like everything that brings us closer to the train and bus. Politicians should also consider long-term options for making public transport more attractive. The climate ticket in Austria is a very good example. If you buy this annual ticket, you can use public transport throughout the country for the equivalent of just 3 euros per day. In the end it is a political decision. I see some catching up to do in Germany. Also in terms of internet connections and reception on the go.

In Germany, many complain very often about the train. Do you think that’s justified?
It’s a national sport, not just in Germany. I also observe this in countries like Austria or Switzerland, where things are going very well and people still complain. I think that’s a good outlet for venting frustration and aggression. It will be unfair if the railway employees get it. They must almost be psychotherapists. I think a lot of things are actually going pretty well in Germany too. All we need here are more trains and railway lines. We also have to electrify the routes more quickly.

Because the nine-euro ticket will probably mean that significantly more people in Germany will be taking the train in the summer: Which routes can you recommend?
The narrow-gauge railway in Zittau is wonderful. And I really enjoy driving through the Harz Mountains. One of the most beautiful routes of all is a very short one on Lake Constance: from Lindau-Reutin to Lindau Island. You see the mountains and when you drive to the island, Lake Constance to the left and right.