Mount Everest is becoming the highest garbage dump in the world

Mount Everest is becoming the highest garbage dump in the world 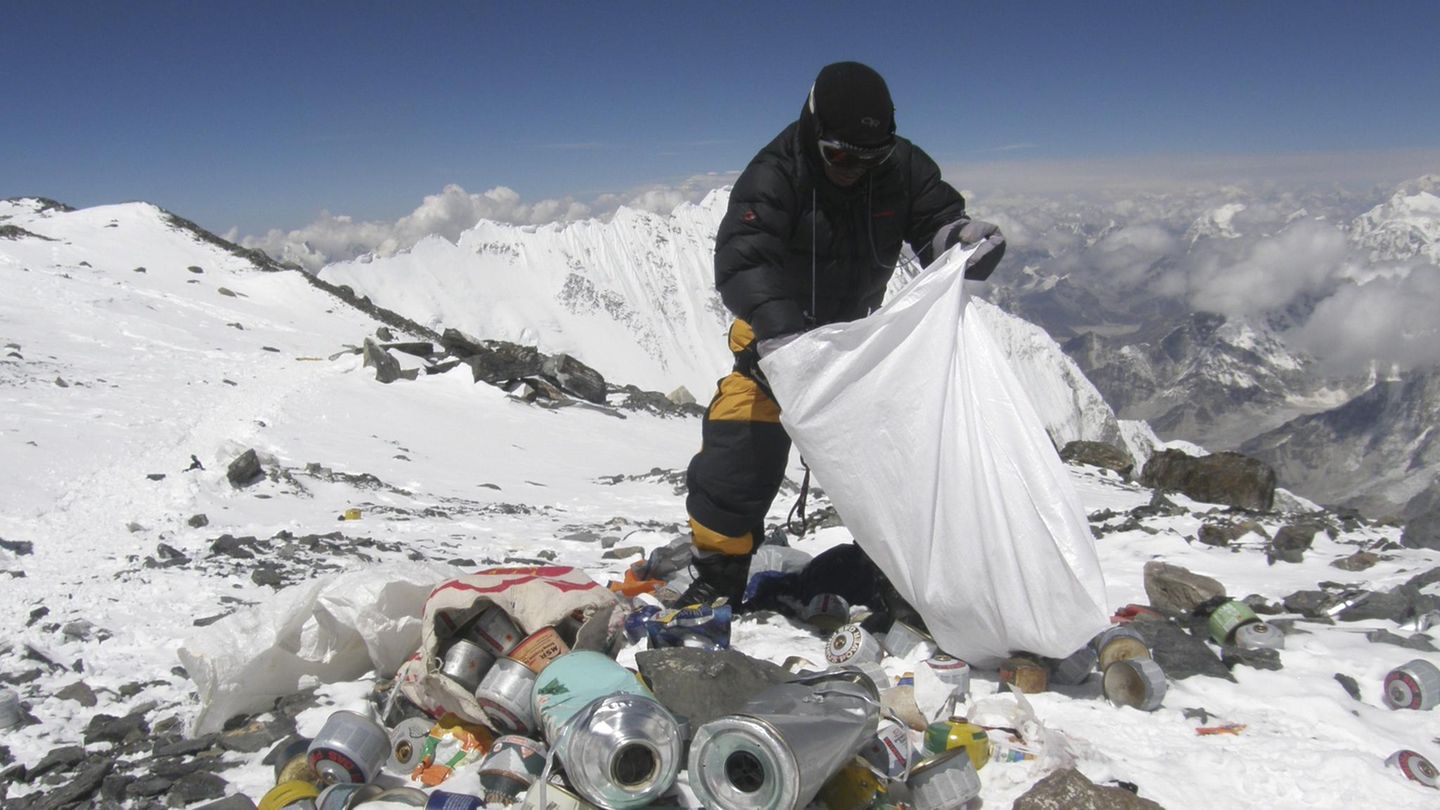 Empty oxygen bottles, old tents and sleeping bags as well as faeces: the highest mountain in the world has degenerated into a giant heap of rubbish. Climate change is only making the problem more visible.

Those who hike at the foot of Everest may be amazed. Waste separation is definitely an issue here. One can see low stone houses, maybe they are former dwellings, covered with green corrugated iron. Signs hang over culverts that may have been windows, reading “Glass and Cans” in Nepali and English over one and “Plastic and Paper” over the other. It is also surprisingly clean on the paths and in the villages. There is little rubbish lying around in the Everest region.

But it is also true that the Sherpas and the Nepali in general are not so concerned with eco-thinking. If you look at the regions that are less frequented by tourists than the spotlight Khumbu, if you look around the capital Kathmandu, you get a completely opposite picture. Whether city or country: valleys full of plastic bags, riverbeds full of faeces, mountains of tin cans and indefinable wild garbage dumps of all kinds are everywhere in this poor country.

The garbage problem on Everest itself has been known for a long time. Oxygen bottles, old tents and sleeping bags, faeces, mainly left behind by western tourists and alpinists, are always an issue. As the number of those who want to climb the mountain grows, so does the amount of debris that remains between the base camp and the death zone. Climate change is only making the problem even more visible: Because it has been unusually warm on Mount Everest in recent years, the legacies of long-past expeditions are also emerging from the ice.

The Nepalese government, like the government in Beijing, has been trying to counteract the problem for years with different approaches and only moderate success. The first Eco-Everest expedition to clear up the mountain started back in 2008, supported by the International Center for Integrated Mountain Development based in Nepal, the United Nations Environment Program and the Nepalese government. By 2012, more than 13,500 kilograms of waste and more than 450 kilograms of human waste had been brought down, as well as the remains of five dead climbers.

Again and again, tourists have recently been held accountable. In 2018, it was reported that China had already collected more than eight tons of garbage from Mount Everest, including more than two tons of human excrement. 30 mountaineers had previously picked up the dirt, so to speak, by hand. Since 2015, mountaineers in Tibet have had to pick up at least eight kilos of rubbish on their way to the summit. The Chinese authorities charge returnees a hundred dollars for every kilogram of garbage that is not handed over.

#Project360 in the Himalayas

Now anyone can climb Everest

Similar rules apply in Nepal. Last year, mountaineers are said to have carried back almost forty tons of waste from Everest. Although according to the non-governmental organization Sagarmatha Pollution Control Committee (SPCC), only every second climber delivers the required amount of waste. Because the fine of up to four thousand dollars is of course a joke compared to what the climbers pay to climb up. In 2019, the Nepalese authorities also banned single-use plastics in the Everest region.

All plastic drinking bottles and plastics with a width of less than thirty micrometers are therefore banned in the province. A special challenge is the excrement of the mountaineers on Mount Everest. They are either not disposed of at all – or in cesspools near the small Sherpa village of Gorak Shep below the base camp. But there is a new danger here: During the monsoon, the pits can overflow and contaminate the drinking water. On the Chinese side, a different approach is now being taken: the authorities are working on environmentally friendly toilets.

Around fifty more clean-up campaigns were planned for Mount Everest in 2020. But then came the pandemic. The government in Kathmandu planned to remove 35,000 kilograms of garbage from Everest and five other Himalayan peaks – in addition to the highest mountain from Lhotse, Pumori, Ama Dablam, Makalu and Dhaulagiri. The army should be used for the task, for which around eight million euros were estimated.

But a bizarre argument broke out over this mission. Some of Nepal’s leading mountaineers claimed the job for their guild. The well-known alpinist Kami Rita Sherpa said that the army was simply not able to reach the high altitudes.

“They have indeed collected rubbish from lower elevations,” he said in the newspaper interview, “but they should mobilize Sherpas to remove rubbish from higher elevations. Only Sherpa guides and porters can do that.” And they should be paid appropriately. “Climbing Sherpas are the right people to clean the peaks,” agreed Phurba Tashi Sherpa. Nepalese Army spokesman Bigyan Dev Pandey countered that he was confident his team would be able to reach the upper areas during the cleanup.

In fact, the Nepalese authorities can refer to some experience in this area – according to their own statements, they disposed of around ten thousand kilograms of waste on the highest mountains in the world in 2019 alone. But bringing used oxygen and cooking gas cylinders, climbing equipment, food packaging, cans and bottles down from higher ground is certainly not an easy task. In some cases, the garbage has been known to lie in the snow and ice for decades.

Another challenge for the rescue teams are the corpses of the mountaineers who died and are still lying on the mountain today. “Sherpas risk their lives doing this – most of the bodies are frozen and therefore weigh a good 150 kilograms,” Ang Tshering Sherpa, former chairman of the Nepal Mountaineering Association told international media. “Removing bodies from the upper Everest camps is a particularly difficult task.”