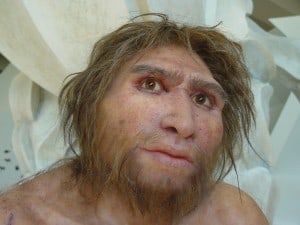 “Palaeon” is the name of the newest prehistoric man museum in Germany. The focus is on the wild horse hunt in Schöningen (Lower Saxony): the oldest javelins in the world were found there. With their age of 300,000 years, they also fit – purely theoretically – with the Steinheim prehistoric man.

Nowhere in the world has processed wood been able to survive as long as in the North German lignite basin near Helmstedt. Between 1994 and 1998, seven wooden spears were found ten meters underground. They were able to survive for a good 300,000 years because they were kept permanently moist on the one hand and sealed airtight on the other. This protected them from decay and rot in equal measure.

But not only the state of preservation of the Schöningen spears was a world sensation. The processing technology for hunting weapons also made headlines around the world. It changed the image of early man in the Palaeolithic. The spruce wood was up to two and a half meters long and strangely enough thicker in the front third than in the back. It was only when throwing that it became apparent that the center of gravity was optimally balanced in this way. Sports scientists were able to prove in experiments that the flight characteristics of the ancient wooden javelins are comparable to today’s Olympic javelins made of metal.

Schoeningen spears are scientifically assigned to Homo heidelbergensis. So far, only simple hand axes and flakes have survived from this type of prehistoric man. It was imagined in a relatively primitive way as a scavenger and fruit collector who could at most prey on smaller animals. Composite tools made of stone and wood as well as coordinated group hunting of herds of game were first believed to be capable of the anatomically modern human being, Homo sapiens. That has changed since the Schöningen excavations.

Thousands of bone fragments prove that large and fast wild horses were hunted here. Weapons and tools show that the booty was gutted and processed on the spot. The entire find complex shows that people were able to create perfect long-distance weapons and plan effective division of functions much earlier. The European Homo erectus, the so-called Heidelberg prehistoric man, was closer to us in terms of creativity and communication than previously thought.

The presentation of the new museum is correspondingly modern. Set in the middle of a barren steppe landscape, the futuristic glittering building catches the eye from afar. Hardly any right angles, everything sloping and pointed. Glass and metal reflect the landscape and cloudy sky. The “Palaeon” is right on the edge of the abyss: Right behind it begins the kilometer-wide hole in the ground where giant excavators have been mining lignite for decades. Only a single pedestal remained at the edge, and the excavators had to make a detour around it. This is the site where the spears were found, the former hunting ground on the shore of a large lake.

The new museum was planned as a “research and experience center”. Especially for children there is a lot to discover and a lot to unravel. The state government of Lower Saxony has expressly declared the new museum to be an “extracurricular place of learning”. This encourages visits not only from school classes, but also from day-care centers and youth groups. Catchy motto: “Discover the primitive man in you!”

The “Palaeon” is a museum offering with all senses: There is a lot to see and hear, sometimes confusingly too much. The primeval man himself is therefore a successful highlight and resting point. Although no bones of his own were found in Schöningen, he was reproduced here in plastic (“dermoplasty”). Life-size and naked he squats there, tanned and looking real down to the last hair on his chest and beard. In his hands he holds a huge horse skull. His view stretches far out of the window – directly to his ancient hunting ground by the lake, ie to today’s place of discovery of animal bones and hunting weapons. This small, well thought-out staging is one of the best that museum design and museum didactics have developed for the presentation of prehistory.

The state of Lower Saxony financed the new building with around 15 million euros. But the new museum would not exist without the “Schöninger Speere Friends’ Association”. When the association was founded in 2000, his main concern was still a bold vision: the establishment of a “research and training facility” on site. The dream has come true, after only 13 years. Otherwise – this much is certain – the spears would not have remained at the place where they were found, but would have been presented elsewhere in the country.