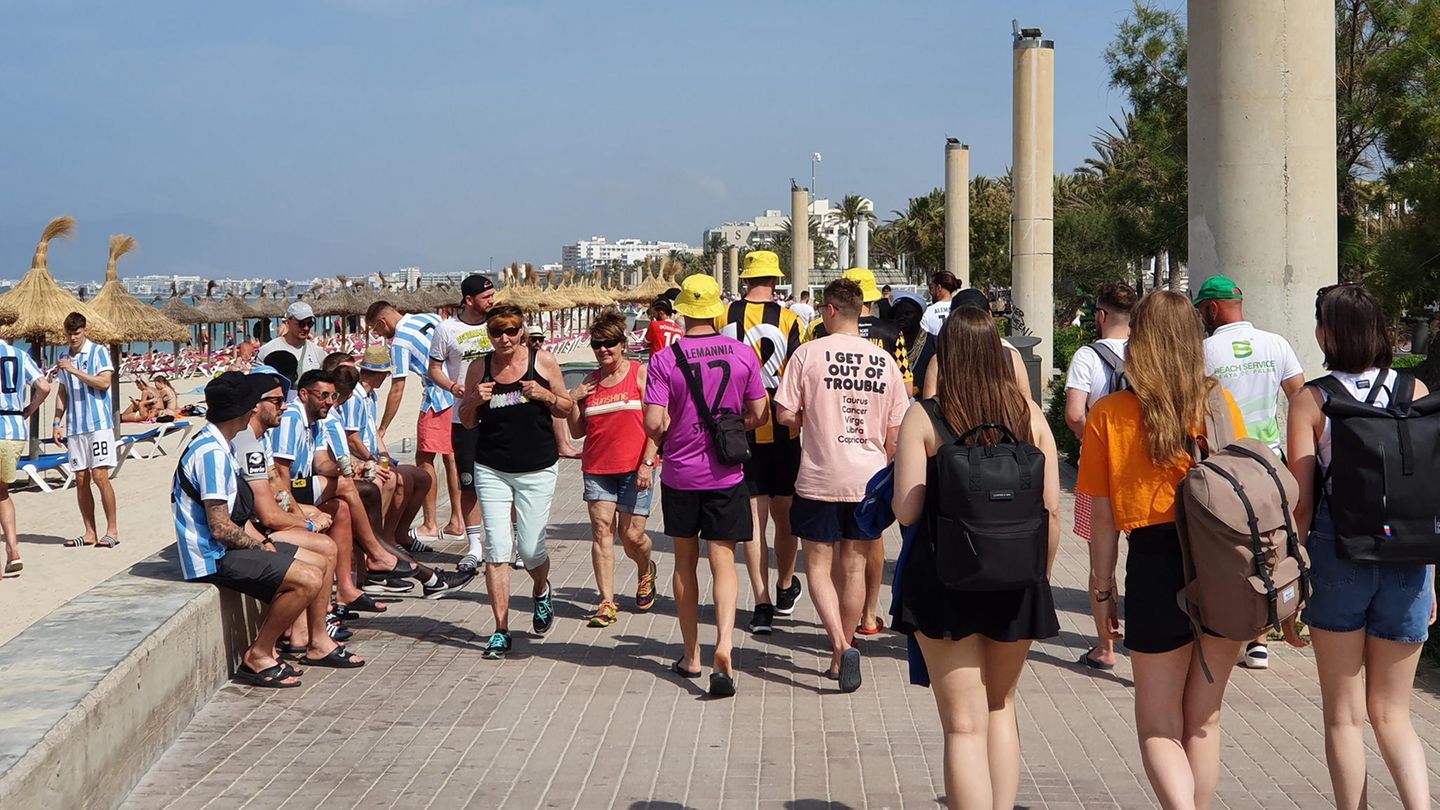 Against drinking tourists: restaurants on Playa de Palma are introducing a dress code

Last week, an initiative to upgrade Playa de Palma on Mallorca said that drinking tourism was even worse than before Corona. Some restaurants are now responding with dress codes to raise standards in stores.

Just last week, the “Palma Beach” initiative, which is trying to upgrade Playa de Palma on Mallorca, sent a depressed sign: The drinking tourism on the Germans’ favorite island is even worse than before the corona pandemic, the season is practical ran. And this despite the fact that many locals had hoped that two years of standstill could steer the image and focus of gastronomy on Mallorca in a different direction – away from bucket booze and German hits, towards fine cuisine and sustainable holidays. Of the star reported.

But since May 10, German tourists in particular have been landing on the island every minute and you might think that the bowling clubs, football clubs and bachelor parties have never been gone. Now eleven restaurants on Playa de Palma are making a last-ditch attempt to raise the standard in their establishments. In the future there should be a dress code to put the party people outside.

In practical terms, this means that, especially in the evenings, a stricter dress code should be observed than before. Guests in flip-flops, football jerseys, sleeveless shirts or disguises should no longer be entertained. Swimming trunks or tops that advertise bars that “advertise alcohol consumption” should also be taboo, as the operators of the bars announced at a press conference.

“What we are trying to communicate is that guests should please shower and change at the hotel before entering the premises. They should not come directly from the beach or from drinking on the street,” said the managing director of the Palma Beach initiative “, Juan Miguel Ferrer, according to several media outlets. During the day you will meet the regulation with a certain ease, but in the evening you want to strictly adhere to it.

It is up to the innkeepers to decide exactly what the dress code means. Guests should be able to find out which clothes are undesirable and which are allowed via a QR code in front of the bars.

Ferrer: “The problem is the party on the street”

Even if it is restaurateurs who are using the means at their disposal to defend themselves against the drunken tourists, Ferrer emphasized very clearly: “The problem does not exist in the bars, the problem is the party on the street”. The ban on alcohol sales that has been in place since 2020 has led to a “mafia-like network of itinerant dealers” illegally bringing drinks to men and women. Here the police would simply not control enough, as the “Mallorca Magazin” reports.

As strict as the managing director of the “Palma Beach” initiative sounds, he also emphasized that all holidaymakers from Germany are still welcome on the Playa. “In principle, we have nothing against young people who want to celebrate here. That is and has always been the essence of Playa de Palma,” said Ferrer.

However, he expects tourists to abide by the existing rules: “Germans love rules and they are usually very exemplary when it comes to complying with them. However, the Mallorcan authorities do too little to convey to holidaymakers that these rules exist.”

The Majorcan government has launched a number of concepts in recent years to put an end to excessive drinking tourism on the island. Attempts have been made to keep tourists in check, in particular by banning alcohol in public, the ban on the notorious “bucket drinking” and a ban on smoking in public places and on some beaches. But the original plan to get away from cheap tourism and towards an upscale audience has still not succeeded.

Perhaps the last and most drastic step would be a sharp reduction in the number of overnight accommodations in order to give the island’s hotel industry more exclusivity. The biggest problem with this is money. The residents of Mallorca have had a deep love-hate relationship with the drunk tourists for decades. On the one hand, they fear for the image, culture and nature of the island, on the other hand, holidaymakers shell out a lot of money for their trips.

Mallorca before the tourist boom: You’ve never seen the island like this before

Image 1 of 11 of the photo series to click: On the Platja de Palma in 1958: In 1953, the Hotel San Francisco was one of the first hotels on the famous promenade. The photo is taken from the photo book “Mallorca clássica” by Josep Panas i Montanyà, which was published by Heel Verlag.

Almost 45 percent of the gross domestic product (GDP) of the Balearic Islands is generated in tourism, as the “Guardian” reports. Around 200,000 jobs depend on the industry. In order to make Mallorca more sustainable for the future and actually address a higher-priced audience, a way must be found to reconcile this with the local economy. The island has been looking for exactly this path for years.