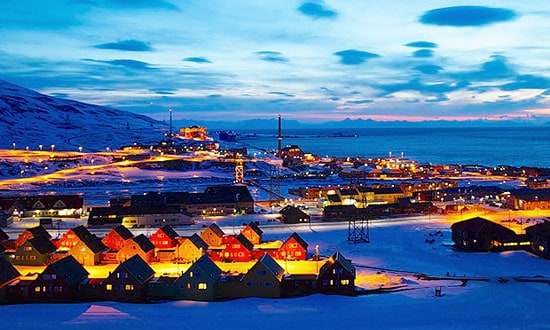 The Norwegian archipelago of Svalbard lies north of mainland Norway and east of Jan Mayen Island. Its name translates roughly to “cold desert island.” In fact, it is one of the world’s most remote places. There are no roads connecting Svalbard to the rest of the world.

Today, Svalbard consists of 14 islands, including Longyearbyen and Barentsburg. They lie within the Arctic Circle and are home to about 2,500 people. A majority live in Longyearbyen, a town founded in 1904.

The archipelago is governed under international law by the United Nations Convention on the Law of the Sea. This agreement establishes Svalbard as a sovereign state. However, the archipelago does not belong to any nation. Instead, it is administered jointly by Norway and Denmark.

The name Svalbard is derived from the Old Norse word svalr (“cold”) and barð (“edge”, “ridge”), referring to the cold climate and the prominent ridges that form along most parts of the coastline. In addition to being used for the entire archipelago, it is also applied to the large island of Spitsbergen, where the majority of settlements are located.

In Norway, the archipelago is known as Jan Mayen Island Group, while the larger island of Spitsbergens name is pronounced. In Iceland, the archipelago was named Vestmannaeyjar (“west mannaeyjars”) until 1874, when the name was changed to Svalbard.

In English, the archipelago has been called Spitsbergen since 1611, and in Danish it is still referred to as Svalbard.

The Svalbard Treaty of January 1920 defined Svalbard as “all islands, islets and rocks lying seaward of the line connecting Point Barrow, Alaska, and Cape Sabine, Greenland.” This definition excludes Spitsbergen Island, which lies further west, though it does include some small islands off the coast of North America.

As Svalbard is north beyond the Arctic Circle, it enjoys permanent daylight in summer and continuous darkness in winter. There is no sunset or sunrise; however, there is a change in the length of the day depending on where one lives. For example, Longyearbyen (population 2,400) in western Svalbard experiences 24 hours of daylight every day of the year. Midnight sun occurs from June 21 to July 22 and again from December 14 to January 13. Polar nights occur from November 16 to January 10.

In midwinter, the sun never sets and stays above the horizon for about 7½ hours each day. During the summer, the sun rises around noon and sets around 11 p.m., giving rise to the term “midnight sun”. However, because of the extreme variation in solar elevation, the actual duration of sunlight varies greatly throughout the year. For example, the longest period of uninterrupted full sunshine

The term “Dutch East India Company”, commonly known as VOC, refers to the joint stock company formed in 1602 under the leadership of Michiel de Ruyter, which was responsible for trade activities in Asia during the 17th century. The company became one of the most powerful corporations in the world. In 1621 it took over the Portuguese monopoly and established the colony of Batavia in present day Jakarta, Indonesia. After the English captured the city in 1629, the company lost control of its colonies. However, it continued trading independently and expanded into the spice trade. By the end of the 18th century, under the leadership of Pieter van den Broecke, the company had become the dominant force in global commerce.

In 1648, the Dutch West India Company was founded as successor to the former company in the Netherlands Antilles and Aruba.

During the Eighty Years’ War, the Dutch Republic successfully defended itself against Spanish Habsburg forces. This allowed the Dutch to gain control of large parts of South America, Africa, and Australia. During the same period, the Dutch began colonizing North America.

After the United Provinces gained independence from Spain in 1814, the Dutch Empire collapsed. The Netherlands became a republic within the Kingdom of Holland in 1840.

In the 19th century, the Netherlands experienced rapid industrialization and urban growth. The nation became one of the strongest economies in the world, and the leading exporter of foodstuffs and manufactured goods. World War I caused heavy damage to the economy, and left the nation deeply indebted.

World War II brought about even greater destruction. The German invasion resulted in the occupation of much of the country, and the loss of almost half of its merchant fleet. A famine killed hundreds of thousands of people. When Germany surrendered in 1945, the Allies divided the country into four zones of occupation. The western part came under French rule; the central section went to the Soviet Union; the east was controlled by Britain, while the southern area was administered by the United States.

The post-war era saw the emergence of the European Economic Community (EEC), which gradually replaced national governments as the primary decision makers. The EEC introduced a common market and currency, the Euro.

Dutch discovery, exploration, and mapping of a terra nullius

In 1596, Willem Barentszz, a Dutch merchant captain sailing under contract to the Dutch East India Company, discovered the archipelago of Svalbard while looking for the Northern Sea Route. He named it “Spitsbergen”, meaning “Bear Mountain”. In 1604, the English explorer Martin Frobisher claimed to have found gold on Spitsbergen, although no evidence of such a find exists today.

The archipelago remained largely unexplored until 1818, when the British Arctic expedition under Sir John Ross visited the region. On his return voyage, Ross reported finding coal deposits on the east side of Nordaustlandet, now known as Coal Harbor. Further explorations took place during the following decades, including by Frederick Christian Poulsen in 1838–39 and by Fridtjof Nansen in 1886. These expeditions did not succeed in establishing permanent settlements, however, because of the harsh climate and lack of suitable resources.

During World War II, German occupation forces established a small settlement on Isfjorden, near Longyearbyen, but abandoned it after the war. This led to the establishment of the present-day town of Longyearbyen.

In 1946, Norway applied to join the United Nations, and the Norwegian government began negotiations with the Soviet Union about joint ownership of the territory. A treaty was signed in December 1948, dividing the archipelago into two parts, Svalbard proper and Franz Josef Land, both belonging to Norway; the latter part also includes the North Pole. The agreement included provisions for joint exploitation of natural resources, but there were disagreements over how much each party could exploit. The Soviets wanted access to most of the mineral wealth, while the Norwegians wanted to limit production to what was needed for local consumption.

After the dissolution of the Soviet Union in 1991, the Treaty of Ouchy was signed in 1993, granting full sovereignty to Norway over Svalbard. However, the treaty does not apply to Franz Josef Land.

Today, the population of Svalbard consists of approximately 2,800 people, mostly working in tourism and mining. Most inhabitants live in Longyearbyen, where the airport serves international flights. There are also several smaller settlements, among them Ny Ålesund, Tasermiut, Besselsens Plass, and Barentsburg.

The first settlement on the island of Ameland dates back to 1619, when the Dutch established three small outposts along the coast. These were named De Liefde, Verden, and Smeerenburg. In 1620, the Dutch built another outpost called Terschelling, located further north. This was later renamed Hoorn.

In 1621, the Dutch began building a fortification on the island of Amelisse, which became known as Fort Amsterdam. However, it wasn’t until 1631 that the Dutch expanded the settlement into a town, which was named New Amsterdam. During the 17th century, the Dutch continued to expand the colony, establishing many smaller stations along the coastline. By the end of the 18th century, there were over 60 such stations located around the North Sea.

The largest of these stations was Smeerenburg, where the Dutch had constructed a large base. This station was used primarily as a whaling station; however, it also served as a trading post for the local indigenous population. During the 19th century, the station was used as a quarantine facility during the cholera epidemic that swept across the Netherlands.

By the late 1800s, most of the stations had been abandoned. Most of the buildings still standing today are those belonging to the former Smeerenburg station.

The first known documented hunt took place in 1791, when a group of Norwegians under the leadership of Captain Peter Flemming set out to kill walruses along the coast of Lofoten Island. In 1818, Norway signed a treaty with Great Britain, agreeing to limit the size of whaling fleets operating off the island. This led to a decline in activity; however, it did not stop the practice altogether. A small fleet of hunters continued to operate until 1847, when the British government declared the area a closed zone.

In 1853, the United States bought Alaska from Russia for $7 million. The purchase included Spitsbergen, which had been ceded to Sweden in 1825, and the agreement stipulated that the US could use the land for commercial purposes. However, the Americans did not want to pay for what the Russians called “the icebox”, so they established a naval base there. At the same time, the US Navy built a road across the island, which allowed access to the mainland. The first American ship arrived in 1869, bringing supplies and building materials.

A few years later, in 1880, the US purchased neighboring Jan Mayen Island from Denmark for $1.5 million. The territory

The Svalbard Treaty and Norway’s sovereignty over Svalbard was signed on June 10, 1920, in Washington D.C., United States. The treaty stipulates that Svalbard shall remain under Norwegian sovereignty. The treaty was ratified by the Norwegian parliament on April 8, 1921.

In 1934, the International Convention for the Regulation of Whaling in the North Pacific Ocean was signed in London. Article II(4) of the convention states that “the High Contracting Parties agree to recognize the exclusive economic zone extending seaward 200 nautical miles from each coast.”

After World War II, the Soviet Union claimed Svalbard as part of its newly acquired Eastern European territories. In 1946, the Soviet Union and Norway agreed to resolve the issue of sovereignty over Svalbard. On September 29, 1947, the parties signed a joint declaration regarding the status of Svalbard. This agreement stated that Svalbard was to be governed jointly by both countries.

In 1973, the Norwegian Parliament adopted a resolution recognizing that the archipelago is part of the Kingdom of Norway. This resolution was revoked on February 20, 1979, by the Parliament of Norway.

On December 7, 1974, the Norwegian Government passed a resolution declaring that Svalbard was no longer subject to international treaties and agreements. This resolution was revoked by the Norwegian Parliament on May 31, 1980.