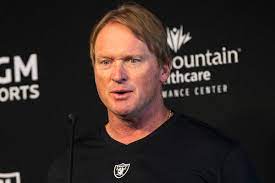 Jon David Gruden was born on August 17, 1963 in Sandusky, Ohio to a family closely associated with football. He was a Cleveland Browns fan and was raised Roman Catholic. He attended Clay High School in South Bend, Indiana, where his father worked as an assistant to Dan Devine at the University of Notre Dame. He then attended Muskingum College in New Concord, Ohio, and later transferred to the University of Dayton. He was a quarterback for three years under coach Mike Kelly. He graduated in 1985 with a diploma in communication sciences.

During his NFL career, Gruden served as a quality control coach and wide receiver for the Green Bay Packers and head coach for the Oakland Raiders. He was also the head coach of the Tampa Bay Bucaneers, the team that won Super Bowl XXXVII after defeating the Oakland Raiders, which he left the previous season. At 39 years, five months and nine days, he became the youngest head coach to ever win a Super Bowl. The Bucaneers fired him in 2009. He worked as a color analyst for ESPN on Monday Night Football broadcasts and for ABC/ESPN as a color analyst.

Jon Gruden and his wife Cindy have three sons – Jon II (Deuce), Michael and Jayson. His younger brother Jay is currently the offensive coordinator for the Cincinnati Bengals. His wife is from East Tennessee and studied at the University of Tennessee, where he briefly worked as a coach in 1986.