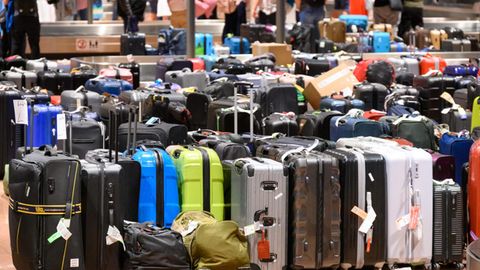 Adventures
How Frankfurt Airport wants to prevent the system collapse

Start of vacation in Hesse and Rhineland-Palatinate

The toughest test of the summer is yet to come for Frankfurt Airport. A reduced offer should avoid aircraft traffic jams, mountains of suitcases and thousands of annoyed passengers.

Frankfurt Airport is gearing up for the busiest days of this flight summer, which is already full of breakdowns. Up to 200,000 passengers a day are expected in the two terminals when the federal states of Hesse and nearby Rhineland-Palatinate start their summer school holidays on the weekend of July 22nd to 24th.

The operator Fraport, Lufthansa and the federal police made it clear on Thursday that system breakdowns such as those at the airports in London or Amsterdam should be avoided at all costs with increased deployment of personnel and a slimmed-down flight schedule.

Up to 1,250 aircraft with 285 travel destinations take off and land in Frankfurt every day, with Lufthansa accounting for around 70 percent. “In the past two weeks we have already managed to stabilize the system,” says Fraport spokesman Jürgen Harrer. For example, Lufthansa has canceled almost 6,000 flights at the Frankfurt and Munich hubs for July and August, of which the lion’s share is said to be attributable to the Rhine-Main hub. There, after the end of the Corona lull, operations got particularly stuck with ground handling services, i.e. the service providers who load and unload aircraft, refuel them, clean them or supply them with food.

With the cancellations, Lufthansa wants to make the remaining program more reliable. Even cargo flights will be diverted to Munich by the end of July because there are no ground staff in Frankfurt. “Every canceled flight hurts. Nobody likes canceling flights, including us,” asserted spokesman Martin Leutke.

The crane has primarily canceled short flights in Germany and to nearby neighboring countries and is instead sending customers more and more often by train on short-haul routes. Almost all of the holiday flights will be retained, promises Leutke. “Mykonos or Crete will not be deleted.”

The high demand for travel after the Corona lull had caught airports and airlines unprepared. Managers of the companies admitted mistakes in the personnel planning. The number of passengers is still well below the pre-Corona level. In June, 5 million passengers in Frankfurt meant the highest monthly value since the beginning of the pandemic, but at the same time it was still 24.1 percent less than in June 2019.

Fraport spokesman Harrer dampened expectations of hundreds of temporary workers from Turkey, for whom special rules have been issued by the federal government. Here you have to look closely at the qualifications. In principle, Fraport still needs several hundred additional employees despite ongoing recruitment. “There is no structural shortage of staff at Lufthansa,” said Leutke. He attributed the bottlenecks to the high level of sick leave due to Corona and a large number of small events that hampered operations.

200,000 passengers are actually nothing unusual for the largest German airport. After all, the daily high is exactly 241,228 passengers, counted on June 30, 2019. There was no talk of Corona at that time and Fraport was longingly looking forward to the opening of the first parts of the third terminal at the airport. Its opening has now been postponed to the summer of 2026, and the airport reached its limits at the end of June with a post-Corona record of 180,000 passengers.

Suitcases regularly get stuck at the hub, which then have to be sent after the passengers in other jets. A mid-four-digit number of pieces of luggage are currently stored in the halls, says Harrer. They are working “at full speed” to hand them back to their owners. The teams have long since started to prioritize outgoing baggage. This also means that waiting times of two hours at the baggage carousel are not uncommon for incoming flights, which you should be prepared for when you continue your journey.

Flight chaos and mountains of suitcases

Many passengers have long recognized the problems with checked baggage and take as much hand baggage into the cabin as possible. This in turn leads to longer passenger checks, says Reza Ahmari from the federal police. However, the passengers here do not have to fear extreme waiting times such as at the start of the NRW holidays in Düsseldorf.

The service providers have almost as many staff on board as before the Corona crisis, says Ahmari. Instead of the usual 20 minutes, the waiting time at the upcoming traffic peaks can be up to an hour. It is therefore advisable to make your way to the gate in the security zone immediately after check-in.

There is no way you can do without identity checks, says Ahmari. He referred to 150,000 prohibited items found at checkpoints last year. “Everything was there, from dummy hand grenades to chainsaws.” In addition, there were 17,000 hits on the manhunt and 1,500 executed arrest warrants.

Fraport, Lufthansa and the federal police appealed to the guests to prepare their air travel well. This includes the possibility of checking in luggage the evening before, checking papers, checking in online and preparing hand luggage optimally for the checks. Airport spokesman Harrer says: “We recommend our passengers to be at the airport two and a half hours before departure.” Federal police officer Ahmari has the most important advice ready: “Please be patient and calm. That will help everyone in these times.”