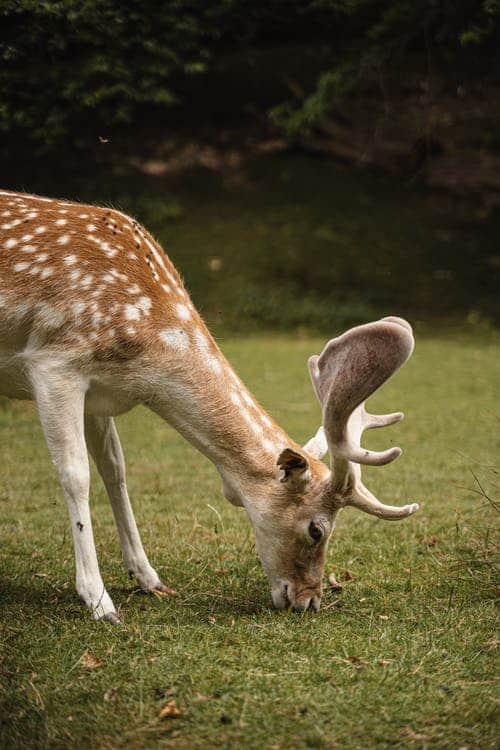 High success rate and capital trophies. In this area it is not uncommon for fallow deer over 4 kg to be shot. In short, this is the place to go if you’re after some major trophies. 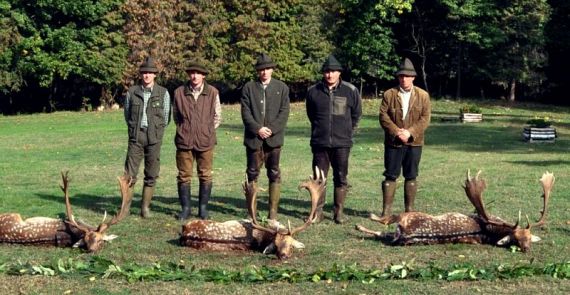 It is an absolute top spot when it comes to fallow deer and around 200 animals are taken each year, some of which weigh around 4.5 kg. The area has received both a 1st and a 2nd place in world records. Half of the area is covered by forest, the rest is mostly flat, agricultural land.

Our hunters live in a single or double room with their own bathroom and toilet in a first-class hunting lodge in the hunting ground. The travel price also includes full board.

Argentina Interestingly, fallow deer were introduced and released into the wild by the ancient Romans early in the history of the European continent. Here the wild species was used as a cultic sacrificial animal and some of it was already housed in parks. Fallow deer quickly developed into respected big game in Europe. This is not without reason, since the fallow deer are impressive animals with a considerable trophy. The shovel-like antlers fascinate laypersons and experts alike and know how to impress. Fallow deer offers the hunter, at least within Europe, a large selection of places and destinations, which in turn promise excellent stocks. Of course, experience has shown that one or the other deer is particularly valuable in various places – extensive research in advance is worthwhile here. As is so often the case, real medal stags cannot be booked every day and it is worth keeping an eye on the market, also in terms of value for money.

There are many healthy fallow deer populations worldwide. The fallow deer originally comes from the Near East and was naturalized in Europe over a long period of time. Due to the ability to get along well even in smaller pens, the fallow deer offered themselves for imperious hunts in the Middle Ages. Surprisingly, there have been several other successful releases around the world. So there is also in New Zealand , Chile , South Africa, Argentina, Peru, Japan and Madagascar mostly huntable stocks. Accordingly, hunting fallow deer is also possible here. From North Africa, however, the fallow deer largely disappeared, also due to climatic developments, it can be assumed. Fallow deer, on the other hand, are mainly found in the following European countries:

Fallow deer generally prefer open park landscapes to well-covered mixed forests. Open clearings are also an absolute must for fallow deer. Depending on the agricultural characteristics of the respective region, there are also field districtssuitable habitat at certain times of the year. Basically, the fallow deer – as can be seen from the numerous successful reintroductions – is very adaptable and versatile. The perfect fallow deer area is a mixture of forest and meadow landscapes in a very quiet location. These conditions can be found in Hungary. Basically, however, the fallow deer do not need the forests as a source of protection, but rather as a food reservoir. Accordingly, they also get along well in landscapes with individual forest islands. Because they chew the cud, fallow deer usually need extensive open spaces and park areas where a wide range of food can be found. Fallow deer hunting is also possible during the day, especially in quiet fallow deer areas.

Fallow deer can be biologically classified as very sociable. Depending on the type of territory and the type of landscape, it can be day or night active game. Outside of the rutting season, the female animals generally form groups of deer, which only mix with the male animals during the rut. The young bourgeois and Knieper often form bachelor packs in which they prepare themselves for the later rut with isolated ranking fights. A few older fallow deer are often experienced loners who take their territory for the rut early on. The size of the respective pack depends heavily on the respective habitat and can vary greatly. Especially in Great Britain, extremely large herds of deer can be observed again and again, some of which comprise up to 100 animals. Of course, this is not the rule and is the absolute exception. Interestingly seemsRoe deer to avoid and not to tolerate the excessive presence of fallow deer. The fallow deer can appear very restless due to its behavior and thus unsettle grazing roe deer.

The male sex separates from the female sex – as so often – the antlers. Furthermore, the fallow deer is significantly smaller than the red deer and has similarly long legs. The long and extremely distinctive frond is characteristic of both sexes. Interestingly, the fallow deer can be found not only in the classic dotted summer and darker winter coats, but also in the colors white and black. These colors can usually be traced back to a breeding past and are particularly popular with foreign hunters. A mighty head and shoulder taxidermy of a black fallow deer makes quite a difference in the hunting room. The shooting prices can also rise very quickly here. When hunting fallow deer, fallow deer can reach a body length of 180 centimeters and a weight of up to 120 kilograms. The Adam’s apple is also very pronounced in fallow deer. The well-known eel line is also pronounced in fallow deer and serves as a further distinguishing featuredeer .

Fallow deer hunting – the fascination of the fallow deer rut

The fallow deer rut is a special experience for every huntsman. Often at home or abroad, hunting fallow deer during the rut offers a unique spectacle that is often remembered forever. The rut usually takes place in Europe between October and November and accordingly extends over several months. The fallow deer often try to get hold of the deer in different ways. On the one hand, experienced fallow deer occupy territories at an early stage and defend them, or a single deer tries to keep a harem of deer. The fallow deer marks its rutting territory in which it creates rutting hollows and marks its territory through various statements. The deer are now lured into the territory by an intense background noise and scent marking. Fallow deer sometimes lose up to 30 kilograms of body weight during the rut. For quite a few deer, the end of the rut is also the time of complete exhaustion. Deer almost never graze during the rut. Often the end of the rut is also the death sentence for many deer due to exhaustion.

The passionate fallow deer keeper and hunter often has his sights set on the impressive fallow deer trophy. The shovel-like antlers are unique in the European hunting world and are very reminiscent of an elk’s antlers. Essentially, the antlers serve to fight out rank fights and integrate the pieces into the social sphere of the respective pack. As a rule, the antler consists of an eye rung and a middle rung. Depending on the shape, the striking shovel is now located above it. As with all cervids, a bast skin forms over the antlers during the “pushing” phase, which is well supplied with blood. Depending on the thickness of the antlers, the trophy is marked with the international CIC formulaspotted. The number of kilograms can also play a decisive role in the trophy evaluation. In Eastern Europe in particular, absolute record deer fall every year, in terms of both CIC points and antler weight. Fallow deer hunting is therefore worthwhile here and should be taken into account when booking a hunting trip.

In Hungary, many large fallow deer are killed every year. In this context, the country already has a legendary reputation. Depending on the area, however, this positive prejudice is confirmed very quickly, to the delight of most hunters. Again and again fallow deer are stretched with up to five kilograms – absolute world record. Whether from a hide or on the huntremains in Hungary only a minor question of style. The fallow deer are often observed for years and the exact shooting date is meticulously planned. Of course, this benefits the foreign hunter. In Hungary, there are usually large forest holdings that house different populations over several square kilometers. Accordingly, every hunting traveler will find a mature dredge for himself here. In terms of price, Hungary is not the cheapest, but it is still very attractive. Last but not least, hunting fallow deer in Hungary can be combined very well with other well-kept game species. There is something for everyone here.