Escape to the intact Caribbean: visiting the art island of Ocean Cay

Escape to the intact Caribbean: visiting the art island of Ocean Cay 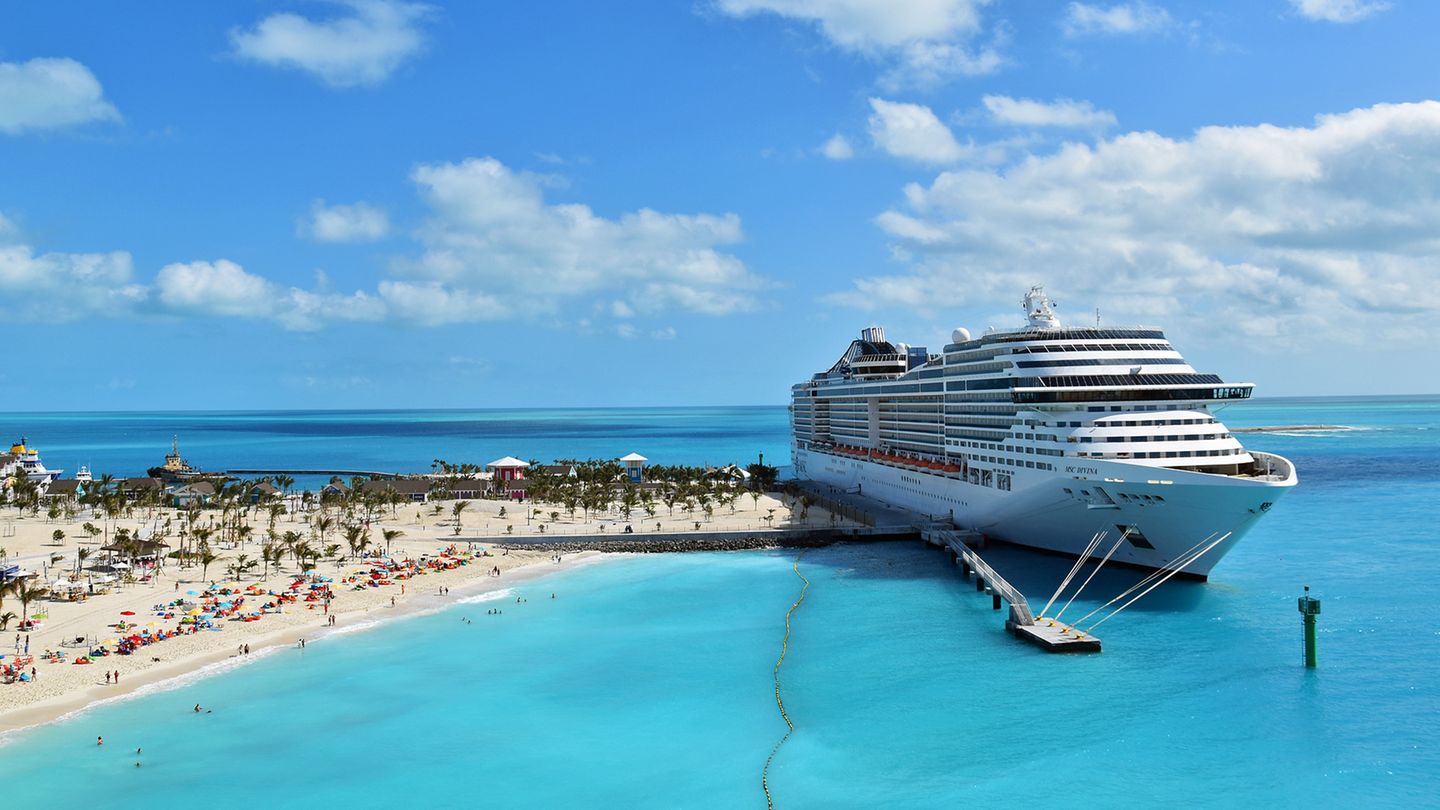 MSC Cruises has transformed a former industrial island into a holiday paradise. The shipping company hands over more than 200 million US dollars for the Ocean Cay renaturation project in the Bahamas.

The wind tugs at the palm trees. Bracing themselves against the wind, the newly planted trees are set to take root in the sandy subsoil of an island that until recently was barren wasteland. For several decades, the fine powder sand on Ocean Cay was vacuumed off industrially in order to be shipped to the coasts of Florida.

“The island was a ruin, a former mine,” said Gianni Onorato, the head of MSC Cruises in an interview with the star a year ago. “The sea around the island was full of scrap metal, we had to dispose of 5,000 tons of industrial waste to restore the island to its original state.”

On his cell phone, he showed underwater footage of rusted metal pipes, submerged diesel engines and old car tires. Everything that was no longer needed simply ended up in the sea, between corals in the turquoise blue water. But the environmental sins are a thing of the past. The island, located 100 kilometers east of Miami, is to become the center of a marine reserve with an intact ecosystem and a top tourist destination.

Since the beginning of 2020, one of the MSC Cruises cruise ships based in Florida’s ports has been docking in Ocean Cay several times a week for a day when the luxury liners are sailing from the USA to the Caribbean. Then, after breakfast, up to 4,000 people flock to the island, which is barely wider than the length of the ship.

Unlike other private islands upgraded by US cruise lines to amusement parks, Ocean Cay was not an oversized extension of a sun deck with even more spectacular water slides, zip lines and a chlorinated freshwater pool. “We wanted something different from the competition, to be authentic and eco-friendly,” says Michelle McGregor.

The 46-year-old Canadian is the island’s operations manager and knows the business of artificial cruise islands in the Caribbean. MSC Cruises recruited Mc Gregor from Royal Caribbean International so that she could help develop the concept for the conversion project.

The private shipping company MSC Cruises, based in Geneva, has spent a lot of money on the project and, according to its own statements, has already invested 200 million dollars in the conversion project – in an artificial holiday paradise.

With Ocean Cay as a pier from the retort, various problems in the Caribbean are avoided. Many of the islands in the region live in dire poverty that passengers would otherwise face. For example, in countries like Jamaica the average gross national income per capita and year is less than 4750 dollars or in the Dominican Republic just under 7000 dollars.

At the same time, you literally circumnavigate ports that suffer from overtourism due to the increasing cruise ship tourism. It’s different on Ocean Cay: Here the tour operator has his destination fully under control.

Within four years, not only was another port of call for cruise ships created, but also a new marine reserve of 165 square kilometers around Ocean Cay. However, almost mountains had to be moved: the fairway had to be deepened for cruise giants with 171,000 GT and 333 meters in length and the landmass had to be changed. A dredged lagoon now meanders to the island’s center, with North and South Beach on its shores.

In addition, accommodation for the 120 islanders – almost all Bahamian from the neighboring islands – shops, a central restaurant, beach bars and a lighthouse were built. It has no classic function as a shipping sign, but serves as a radio mast, viewing platform and illuminated tower for the evening LED light shows.

Now the island is turning green again. 75,000 shrubs, more than 4600 palms and other trees were planted. The island was not only cleaned up underwater: marine biologists examined the condition of the corals, seagrass meadows, mussel populations and the fish population. In the meantime, endangered coral species and up to 400 coral colonies have been settled.

Life and diversity are slowly returning to the underwater world: “We counted six different species of shark and around 90 species of fish in total,” says Owen R. O’Shea, “from the nurse shark to the tiger shark and the lemon shark.” The bearded biologist from the Center for Ocean Research and Education (CORE) is part of the team of consultants that prepared the environmental reports for the underwater flora and fauna inventory.

Ocean Cay: From industrial wasteland to a Caribbean paradise – a tour of the island in pictures 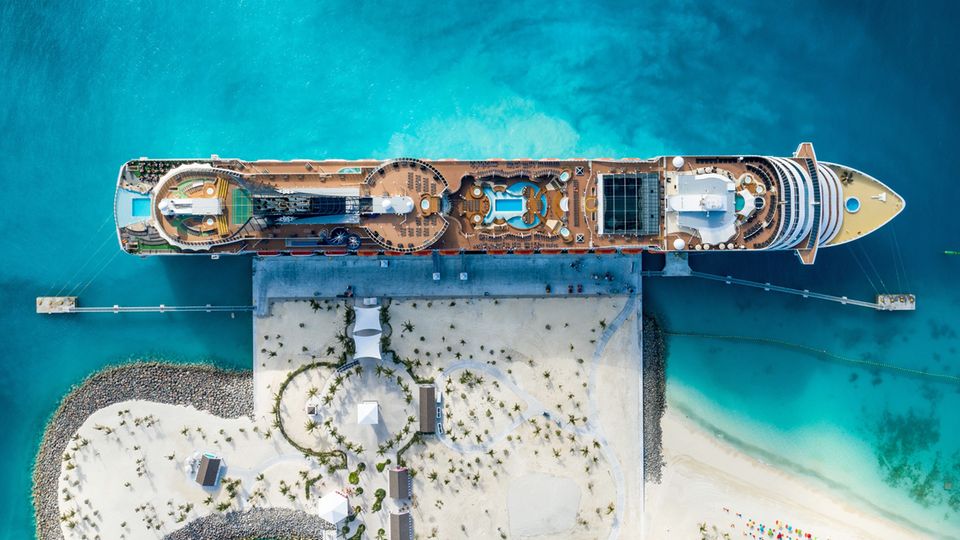 The pier of Ocean Cay from a drone perspective: The island is 100 kilometers east of Miami.

Michelle McGregor has also planned a marine science laboratory. The project on a hill still resembles a construction site. But collaborations with the University of the Bahamas, the University of Miami, and Nova Southern University in Florida have begun; her students offer guided tours on marine biology.

However, the day guests show less interest in science and environmental issues, and more in their personal needs: they stream to the constant sound of music from the floor speakers to the large lagoon, where the free beach chairs and colorful beanbags are taken: splashing around in the milky-azure blue water is the order of the day . The cruise guests are spread over the seven different beach areas, all of which can be reached on foot. Surprisingly, there is less crowding on the three kilometers of beach than on the Platja de Palma at the beginning of the season on Mallorca.

“The water temperature and everything is ideal,” says Horst from Hanover. During his vacation in Florida, the German spontaneously added the three-day trip to the Bahamas. “I booked a cruise for the first time in my life. Yesterday on a shore excursion in Freeport, in the north of the Bahamas, we saw what the hurricane had done there,” he says, half standing in the warm lagoon water. Many buildings were destroyed, others are still abandoned. In early September 2019, “Dorian” swept across the North Islands, destroying 13,000 homes.

In contrast, Ocean Cay lives up to its expectations of undisturbed vacation bliss. Unlike when going ashore in Cuba, Jamaica or other island states in the interior of the Caribbean, visitors are not confronted with poverty and misery here. The renatured art island of Ocean Cay is a place free from dirt, crime, people smugglers, social tensions and other problems – a seemingly ideal world that does not exist in the real Caribbean.

– Backbreaking jobs on cruise ships: “Wages between 3 and 5 US dollars are not uncommon”