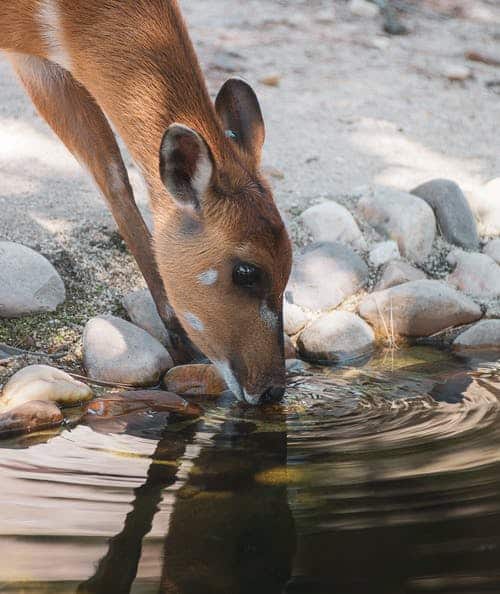 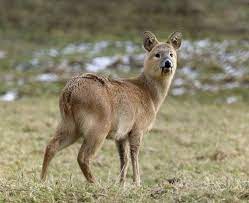 Distribution: England, France (Introduced from China around the turn of the century).

Description: Small deer with a maximum weight of 15 kilograms and a shoulder height of approx. 55 centimeters. Basic cover color yellow-brown in summer and grey-brown in winter. The water deer is antlerless. Similar to the Muntjak, only slightly stronger, the upper canine teeth are elongated.

The water deer is smaller than the native deer. Large black lights, a thick, soft coat and the lack of antlers on the male give this little deer a very feminine – almost cute – appearance. At least from a distance… This teddy bear-like animal has a pair of long canine teeth that make his trophy look like it came from a completely different – ​​and much darker – world. A water deer is a must have in any collection – we have a great new territory that is also home to many Muntjaks! 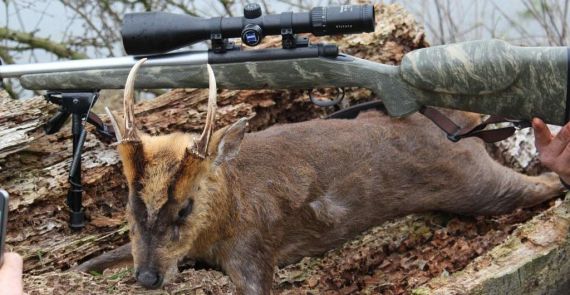 The lively little Muntjac was introduced from India at Woburn Abbey in the 19th century. In 1901 a group of animals was released from there into the wild and over the years that followed a stable population developed in a number of counties in southern England.

We have an exclusive agreement with this district in England and here you will find really large populations of Muntjac and Water Deer.

The muntjac prefers dense vegetation such as blackberry bushes, rhododendrons or other where it can easily find cover. It is a very agile animal that feeds on a variety of plants from different parts of the area.

The hunt is a mixture of stalking and hide, and a number of hides have been set up at strategic points in the hunting ground.

The chances of a medal trophy are good. Hunting can also be combined with fallow deer.

In England you will find the quintessential English countryside of farmland, meadows, hedgerows and copses, together with charming villages, narrow winding streets, large country houses and manor houses and very friendly, open-minded locals.