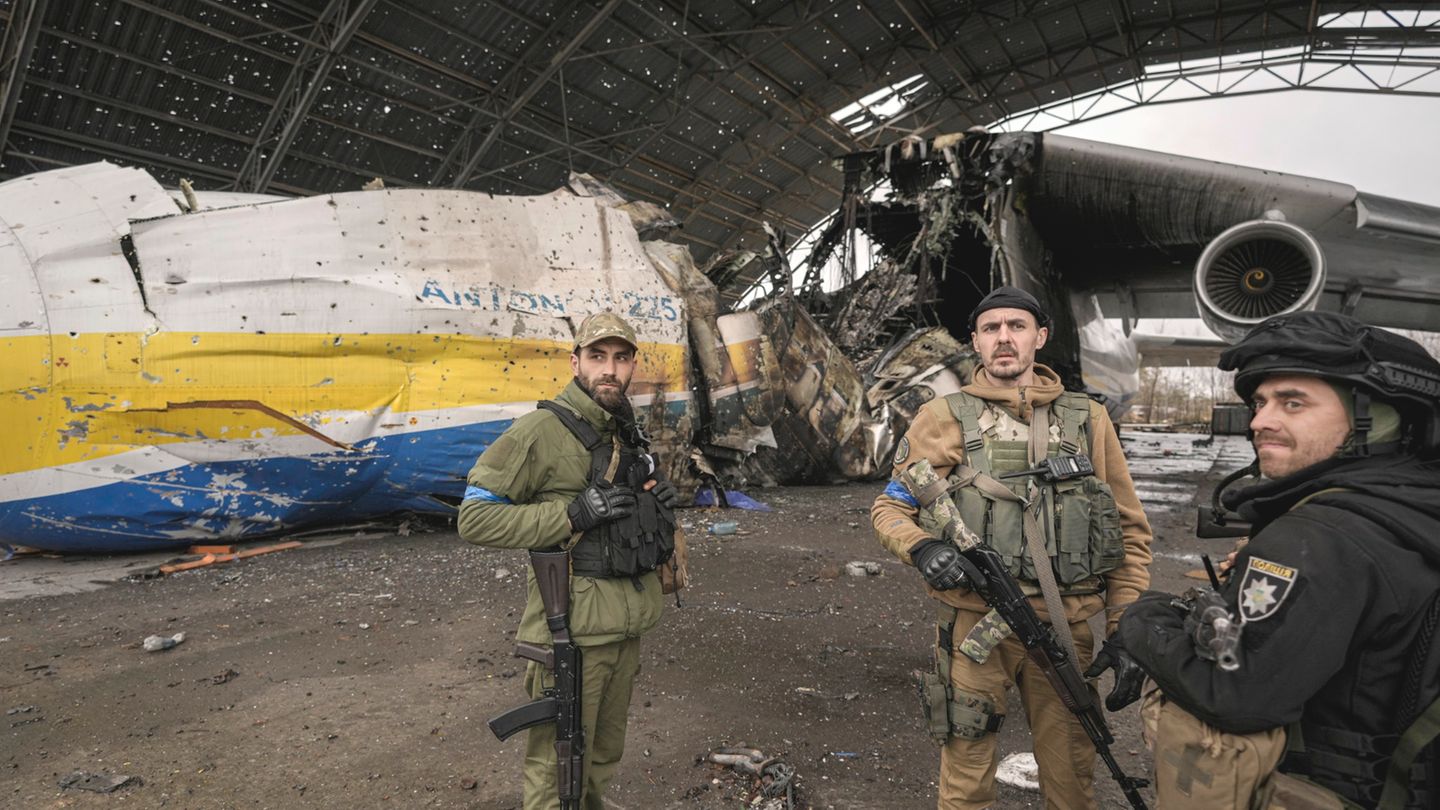 Remains of the largest cargo plane

Cleaning up at Kyiv-Hostomel Airport, which was recaptured from Ukraine. New video footage shows the front wreckage of the Antonov An-225 being pulled out of the hangar, fueling speculation.

Once the world’s largest cargo plane, it was considered the country’s flying symbol, a technological marvel of Ukraine, of which only a single example existed in the world. At the end of February, the An-225 at the Antonov factory airport, 20 kilometers north-west of Kyiv, was damaged during the first days of the Russian war of aggression.

After the Russian troops withdrew at the end of March, the full extent of the destruction not only became visible on the An-225, but also the damage to the entire infrastructure of the airport, including the tower, runway and other hangars. Some of the aircraft parked there, such as the smaller An-26 and An-74, are considered total losses.

Based on current photographs, experts assess the condition of the 84 meter long An-225 with its six engines and a wingspan of 88 meters as “damaged beyond repair” – as beyond repair. The first thing to do now is to salvage the rubble.

A video dated May 26 has now been uploaded to Telegram and YouTube showing the severed front part of the fuselage being noisily dragged out of the open hangar by a wheeled armored vehicle and a tractor.

Unian’s Telegram channel said: “Parts of the An-225 Mriya aircraft destroyed by the occupiers at the end of February are being taken away from Hostomel Airport for disposal.” But where and what will happen to the two parts of the An-225?

Scrapping is not planned, Antonov denies. Rather, it is about documenting evidence of the crimes of the Russian military in cooperation with the Ukrainian national police.

Reusable components that were not damaged in the fire and shelling can also be used to build a second example. Because there is another fuselage of an An-225 that is said to be 70 percent complete in the Antonov plant at Sviatoshyn Airport west of Kyiv, the construction of which was stopped in 1994 for cost reasons. This blank could be used as a basis for a reconstruction. However, there is no reliable information about its condition.

Ukrainian President Volodymyr Zelenskyy has already announced several times the reconstruction, which he estimates will cost 800 million US dollars. Others assume that a sum of up to three billion US dollars will be needed to finance a new building.

Antonov An-225: New images of the devastation at Kyiv-Hostomel Airport

The remains of the Antonov An-225 lie under the once protective domed roof at Kyiv-Hostomel Airport.

“There are different sums for the restoration of the aircraft, but the different range of announced figures suggests that no one has yet estimated the actual costs,” says pilot Dmytro Antonov on his YouTube channel, who is often in the cockpit of the 225

Largest transport aircraft in the world: pilot visits “his” destroyed Antonov for the first time

For Selenskyj, the main concern is the symbolic power of the XXL aircraft, which is supposed to rise again from the ashes like the phoenix bird. According to sources in Kyiv, he would like to dedicate the possible second An-225 to the fallen Ukrainian pilots.