9-euro ticket at Pentecost: "Many railway employees are already walking on their gums" 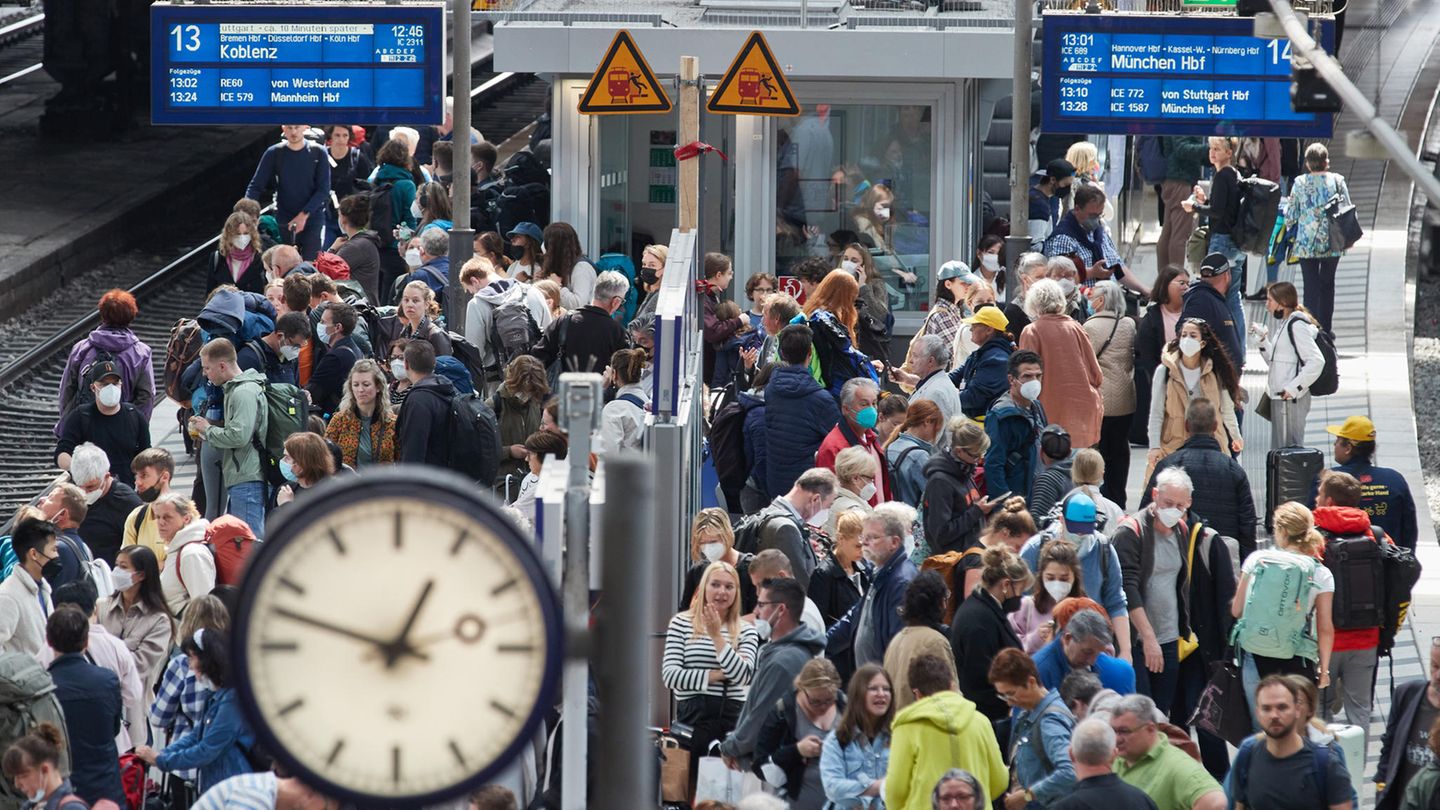 9-euro ticket at Pentecost: “Many railway employees are already walking on their gums”

Bahn in the stress test at Pentecost: “Many Bahn employees are already walking on their gums”

After the Pentecost weekend with the 9-euro ticket, a staff representative from Deutsche Bahn drew a critical interim balance. Every day there were about 400 trains nationwide with too much capacity, so that passengers stopped at the platform.

After the Pentecost weekend with a nine-euro ticket, the staff representatives of Deutsche Bahn reported that the employees were under a lot of strain. “As expected, the nine-euro campaign triggered a great rush on regional trains, which led to significantly more cases of congestion nationwide,” said the Vice-Chairman of the General Works Council of DB Regio, Ralf Damde, to the newspapers of the editorial network Germany (RND ) from Tuesday.

“The feared physical assaults against the railway staff did not occur, but there were verbal attacks,” said Damde. The massive additional personnel requirements made thousands of overtime hours necessary at Pentecost alone. Despite the many additional vehicles used, passengers had to be turned away. “Everywhere in Germany the platforms and the trains were full, in several cases overcrowded trains had to be cleared – but fortunately no stations.”

According to the first evaluations of the problem reports from the train drivers, there were about 400 trains nationwide every day that were too full, so that passengers had to be turned away or bicycles could not be taken along. In total, there were around 700 reports of overloads, problems with passengers or disruptions to the operations center every day. That is significantly more than on an average weekend and also significantly more than on the Pentecost weekends before the Corona crisis.

The fact that many travelers without rail experience could not find their way on the platforms or in large stations led to increased personnel and time expenditure, Damde explained. “Overall, the passengers needed significantly more help than usual. This also included the fact that many people who had not traveled by train for a long time did not know that masks were still compulsory in public transport.”

Lost Places on Rails: A journey to railway cemeteries around the world

Countless hours of overtime for the railway staff

The additional use of vehicles has led to overtime for the railway staff across the board, especially for train drivers, customer advisors, service and cleaning staff and maintenance staff, Damde told the RND. “In exceptional cases, this is possible, but not permanently,” he also said. “Many railway employees are already walking on their gums.”

The FDP transport politician Christian Jung told the Hessischer Rundfunk that the ticket shows that the train is “only partially prepared for additional capacities in local transport and to tourist destinations”. “Because of its condition, the railway infrastructure is not designed for such increases in capacity,” he continued. Whether more people could be won as passengers in public transport from September after the end of the discount ticket also depends on the quality of the services and reforms in local transport, such as the elimination of confusing network borders.

Inexpensive to party on the island: punks board Sylt

Meanwhile, according to the FDP politician, rail freight traffic in Germany partially collapsed over Pentecost and even before that. “Hundreds of freight trains from private railways, European state railways and Deutsche Bahn stand still in Germany every day or can’t get to us at all.” The reason for this is “the management problems” at the group and the “catastrophic condition of the German railway network,” said Jung.