27 things you didn’t know about Iceland Iceland has a breathtaking nature with many thermal springs – even those who haven’t been there know that by now. But there are some not so well-known facts about the small country.

Iceland is small and isolated – which is why the country and its people have their own characteristics. However, one thing is certain: both the people and the island are very popular.

1. The most peaceful country on earth

Iceland has one of the lowest crime rates in the world and has been considered the most peaceful country on earth since 2008 according to the Global Peace Index  . Ordinary police officers in Reykjavik only carry pepper spray and rubber truncheons.

2. Probably the funniest police in the world

Speaking of the Icelandic police – they are probably the funniest in the world. If you don’t believe that, just follow the official Instagram account and find out what the officials do there all day long: feed geese, put your feet up, build a snowman with a mask. But what are you supposed to do as a police officer in a country where there is almost no crime?

The former national player and coach Hermann Hreidarsson proves that the Icelanders not only know how to play soccer, as they showed at the 2016 European Championships, but also know their way around tourism. In June 2014 he opened his Hotel Stracta in Hella in southern Iceland on the route “Golden Circle” – with whirlpools, saunas and 122 rooms.

4. More sheep and puffins than inhabitants 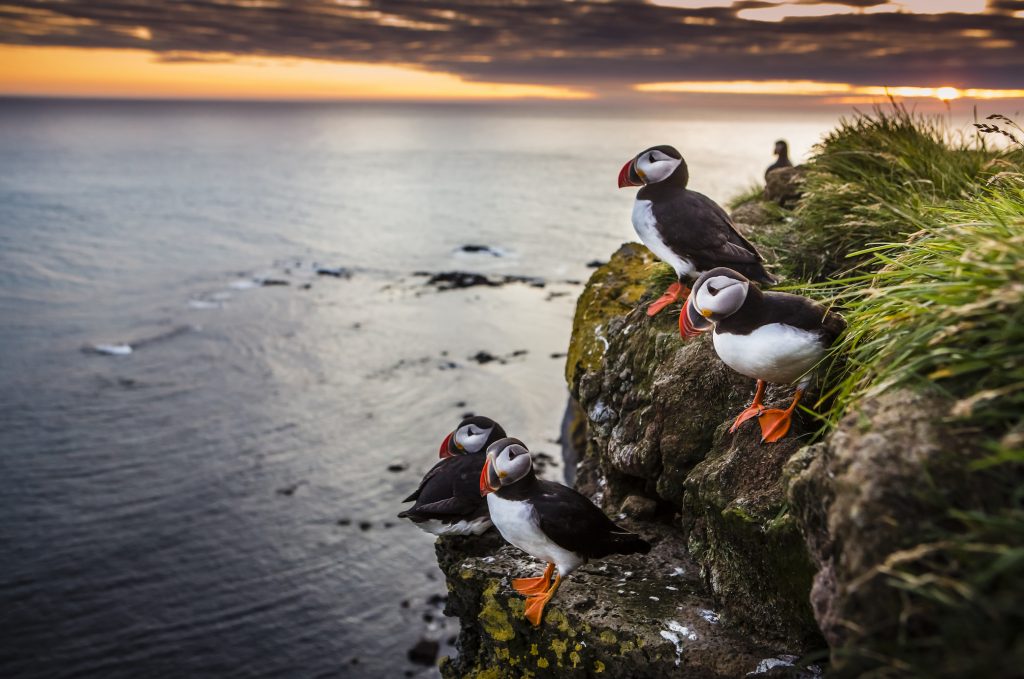 There are six million puffins in Iceland

Bathing in one of the hot thermal springs is a must for all tourists. There are 170 of them in Iceland.

not allowed Whoever enters a house or an apartment in Iceland should never keep their shoes on, because this is considered extremely impolite and is only allowed if one is expressly asked to do so.

In Iceland there are long summer nights when it is light for up to 22 hours in June, for example. The days in winter are correspondingly short: on December 22, it’s just around four hours.

Gammelhai, that’s the traditional Icelandic dish Hákarl. This is fermented Greenland shark meat . What is special about it is that, unlike most other creatures, it has no kidneys, which is why toxins that are produced during metabolism are deposited in the meat. During fermentation, the toxins can break down and the meat becomes edible. Caution: Consuming large amounts can cause diarrhea. 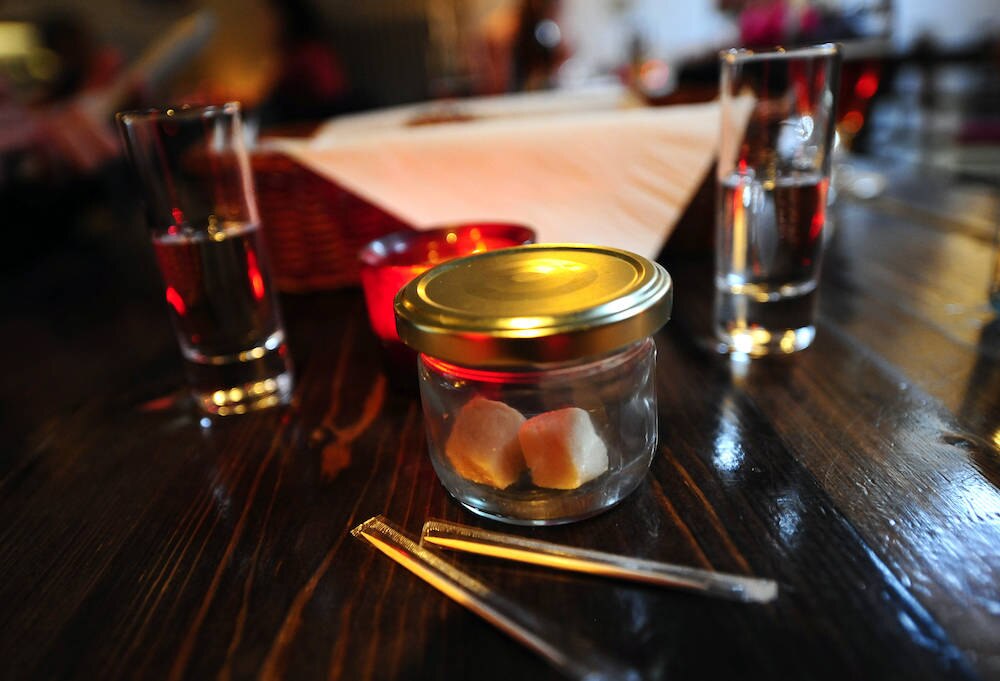 Rotten shark in a jar

9. Other Icelandic “treats” include…

“If you don’t like the weather, just wait five minutes”, is how Icelandic people describe the peculiarities of their climate zone. Weather conditions are subject to change at any time due to the Gulf Stream.

If you complain about the summer in Germany, you should travel to Iceland. Here the average maximum temperature in August is just 12.3 degrees. The winter is relatively mild with average temperatures around the freezing point – this is also due to the Gulf Stream.

This is the nickname of the Icelandic liquor “Brennivín”.

According to their own statements, there are currently so many in Iceland. Measured against the number of inhabitants of 360,000, that is almost 10 percent.

14. Icelanders are getting old

At 83 years, Iceland has one of the highest life expectancies in the world. For comparison: In Germany, the average life expectancy of boys and girls born in 2020 is around 80 years.

… and that is Reykjavík. This means that more than 60 percent of the population lives in the capital. It is followed by Kópavogur with 38,000, Hafnarfjördur with 30,000 and Akureyri with 18,000 inhabitants.

… when all women do nothing – or only what they feel like doing. This also means that nothing happens in Iceland on that day because the men involved have to do everything and therefore cannot go to work.

and not by last name like in this country. Another peculiarity is that the surname hardly seems to be used in Iceland. Everyone here, without exception, addresses each other by their first names, regardless of whether they are doctors, teachers or politicians. By the way: The President should also be in the phone book.

Former soccer player and model Rúrik Gíslason or actor and World’s Strongest Man 2018 Hafþór Júlíus Björnsson – are just a few of the most famous Icelanders. But why do they all end in -son? The reason for this is that Icelanders’ surname derives from the father’s first name, with -son meaning son; Females have the ending -dóttir, meaning daughter.

19. There is an anti-inbreeding app

“Islendinga” is the name of the app that Icelander Alexander Annas Helgason helped develop. If you provide some data, she immediately compares the degree of relationship between two Icelanders – this way, for example, it can be ruled out before a date that you are too closely related.

It is the lack of speed limits on sections of the Autobahn that impresses many tourists about Germany. The speed limit on Iceland’s roads is 90 km/h, and only on paved country roads. Otherwise the speed limit is 50 km/h in town and 80 km/h outside town on unpaved gravel roads, of which there are quite a few.

22. What the colors of the flag mean

Blue, red and white are the colors of the Icelandic flag. The colors represent the mountains, volcanic fire, snow and glaciers.

23. Movies are shown in their original language

All films are shown in Iceland in their original language with Icelandic subtitles. So tourists who speak English can easily watch Hollywood movies while on vacation.

Besides Icelandic, Icelanders also speak English and Danish. The latter is taught as a compulsory subject in school.

25. What an Icelandic horse may call itself

Only animals whose ancestry can be completely traced back are recognized as Icelandic horses or Icelandic ponies. Therefore, horses born in Iceland, once leaving the island, cannot be re-entered Iceland. 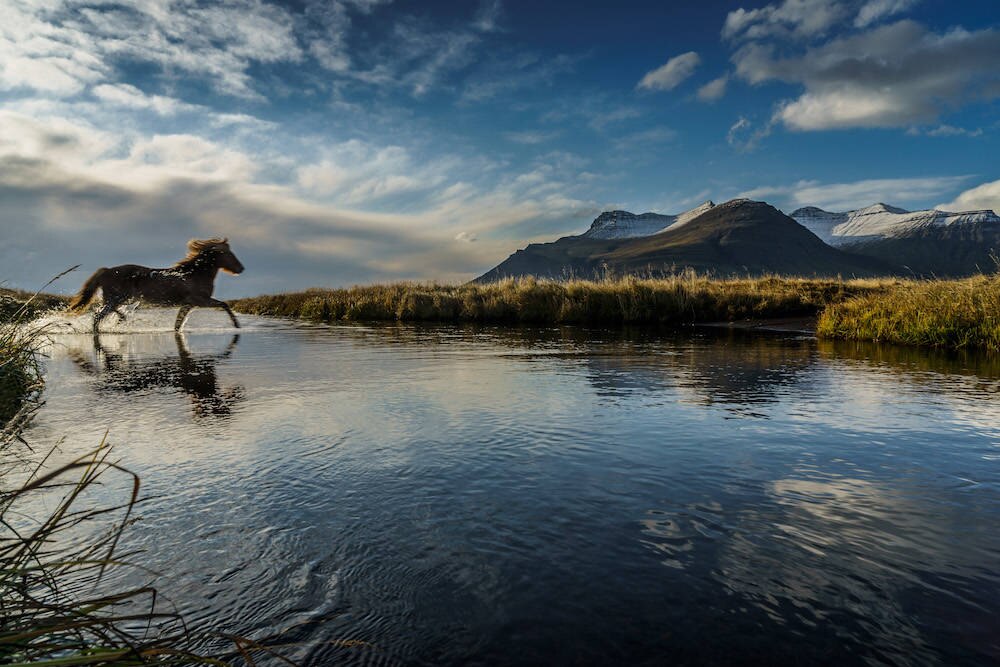 26. There is a penis museum

In Reykjavík there is the Icelandic Phallus Museum, which currently exhibits more than 280 phalluses and phallus

parts of all kinds of mammals, including: 55 specimens of whales, one specimen of a bear, 36 specimens of seven seals – and walrus species. A human penis has also been on display in the museum since 2011. 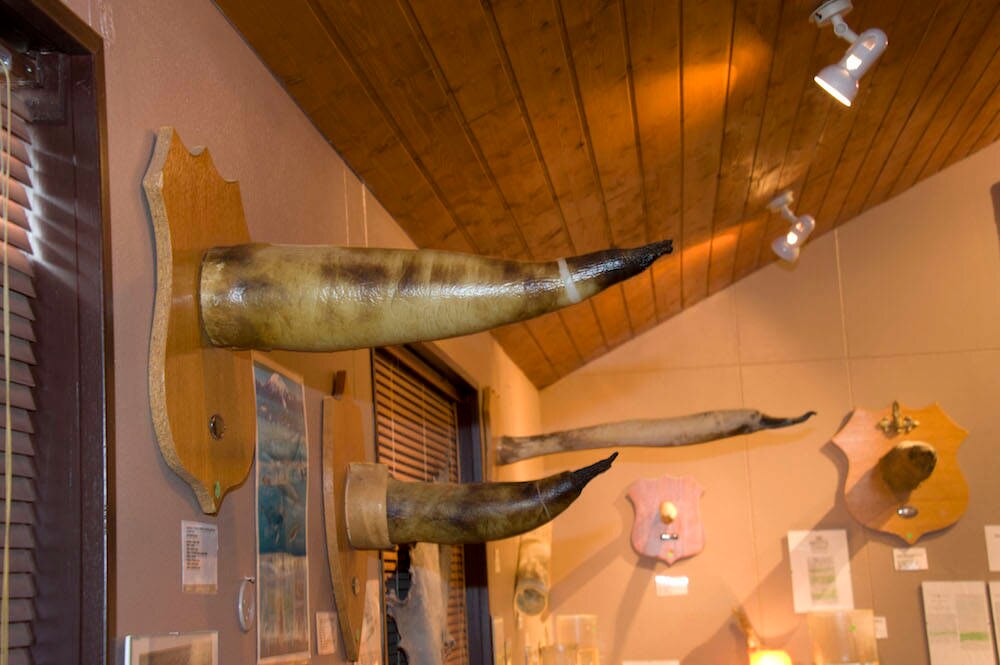 From whales to field mice, the Phallus Museum in Reykjavík has exhibited penises since 1997

27. Father and son in the same team

Arnór Guðjohnsen and his son Eiður Smári Guðjohnsen played for the Icelandic national team at the same time in 1996 – that is unique in the world.