12 Sights In Tirana You Must See!

12 Sights In Tirana You Must See! 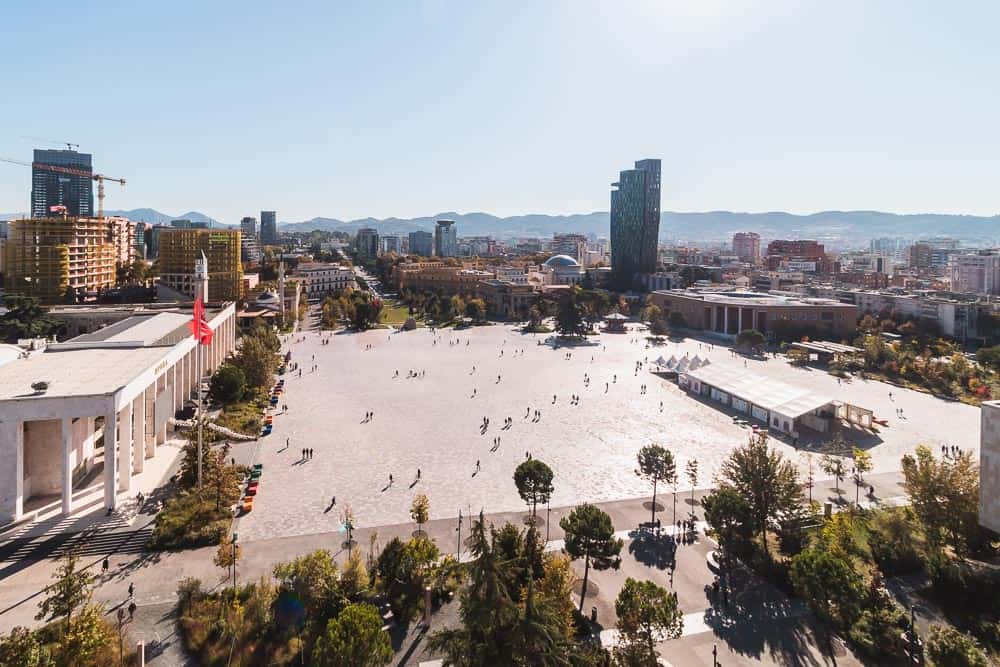 This is my complete guide to what to see in Tirana.It is about the landmarks, attractions and best experiences in the capital of Albania.

There are also the most important travel tips with a map of the sights at the end.

The square is the symbol of Tirana.

The main square of Tirana is dedicated to the medieval Albanian national hero Georg Kastriota “Skanderbeg”.

The Skanderbeg statue in the square is the symbol of Tirana.

Around the square are some of the most important sights of Tirana, to which I dedicate separate points.

These include the Et’hem Bey Mosque with the clock tower, the nearby Catholic Cathedral, the National Historical Museum, the nearby Bunk’Art 2 Museum, the Opera and what was once the most exclusive hotel during the dictatorship: the 4-star Tirana International Hotel. 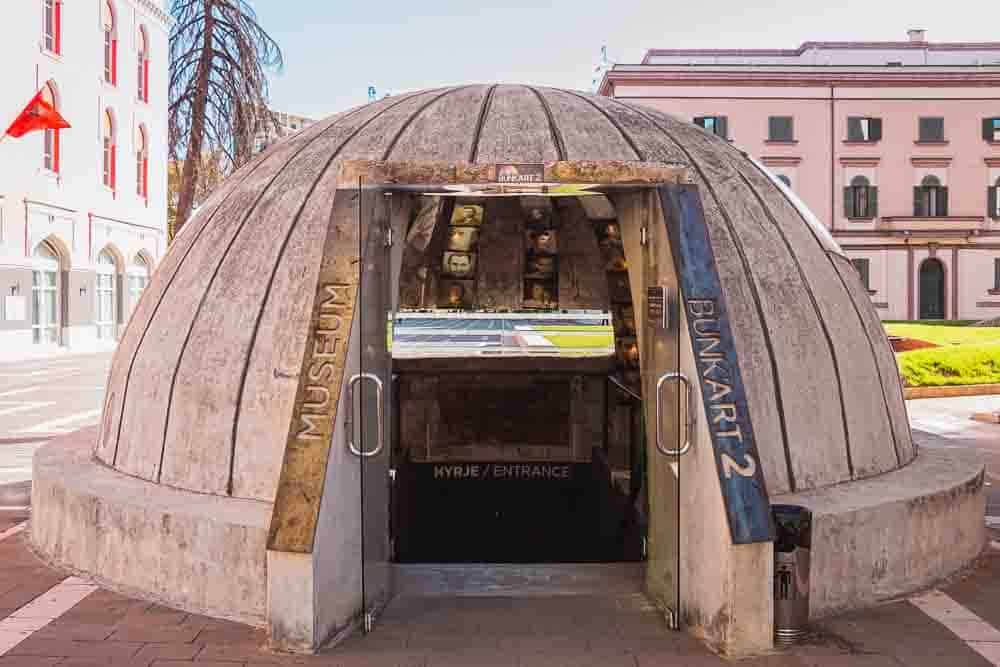 BUNK’ART 2 Museum in Tirana: today the hundreds of thousands of bunkers are a reminder of the dictatorship.

More than 200,000 bunkers are a reminder of the communist dictatorship in Albania.

Most of these are derelict, others are stables, others cafes and some have found a new purpose.

Two examples of this are the Bunk’Art Museums in Tirana.

Bunk’Art 2 is an exhibition in an abandoned nuclear bunker with 2.4 m thick reinforced concrete walls near Skanderberg Square, behind the former Ministry of Public Order.

The exhibition in the 1,000 m² bunker shows how the police pursued opponents of the regime during the communist era.

You see photos, equipment and memories of the political persecution of more than 100,000 people in Albania between 1945 and 1991.

Bunk’Art 1 is the nuclear bunker on the outskirts of Tirana, intended for the former communist leadership.

In the huge 200,000 m² bunker you can see an exhibition on life under the dictatorship, the invasions in Albania and planned rooms for the dictator Enver Hoxha. 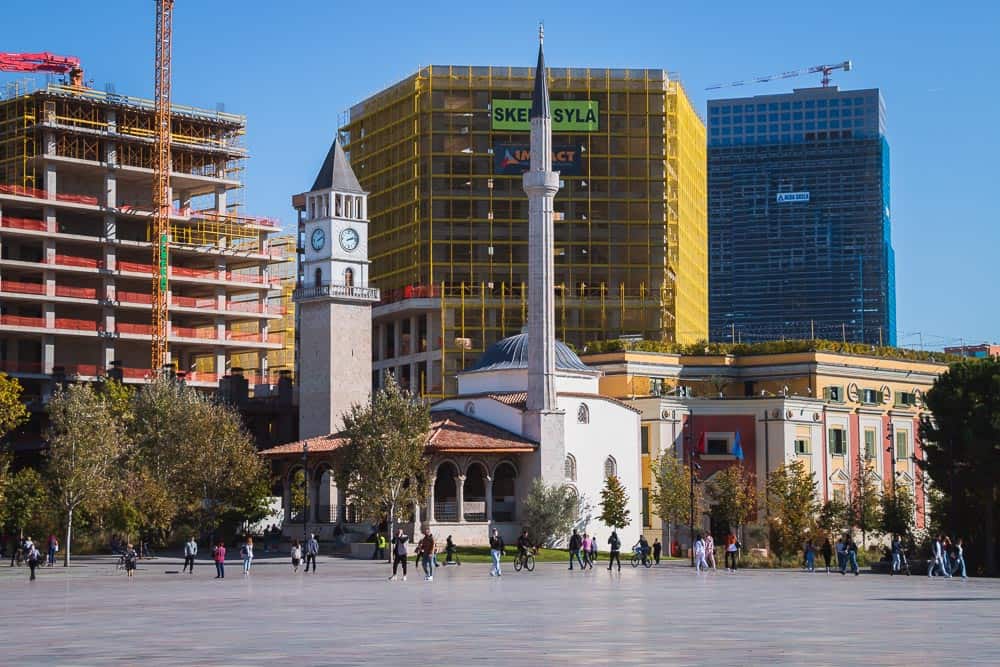 The mosque is one of the oldest surviving buildings in Tirana.

The Et’hem Bey Mosque is one of the oldest surviving religious buildings in the capital Tirana.

It is one of the few mosques that survived the dictatorship in Tirana. Hundreds of mosques, churches and houses of other faiths were then destroyed across Albania.

The Et’hem Bey Mosque dates back to the Ottoman period in Albania, dating back to 1794. This also makes it one of the oldest buildings in Tirana.

It stands in the center of Skanderbeg Square, right next to the Tirana Clock Tower.

The minaret of the mosque, together with the clock tower, is one of the most striking buildings from old Albania. 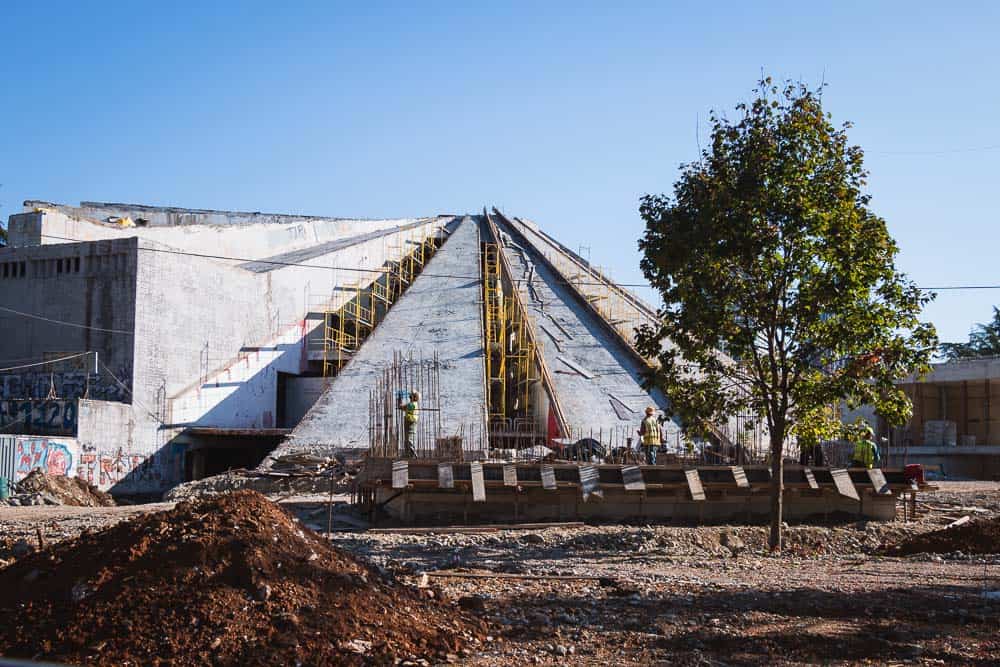 The pyramid is currently a construction site. Write to me as soon as you see that the renovation is finished.

The pyramid, which was actually built as a museum for the dictator Enver Hoxha, fell into disrepair after the dictatorship.

For many years it was a meeting place for the youth of Tirana, with graffiti, places to sit around and partying in the evening.

A project is currently underway to renovate the pyramid to turn it into a cultural center of sorts.

Due to its reputation as a “lost place”, the pyramid was one of the top 10 sights in Tirana even before the renovation. I’m curious to see what exactly will become of it after the renovation.

Please write me in the comments if you have been to Tirana and something has changed in the pyramid. It is only 15 minutes walk from Skanderbeg Square. That’s how you get to her. 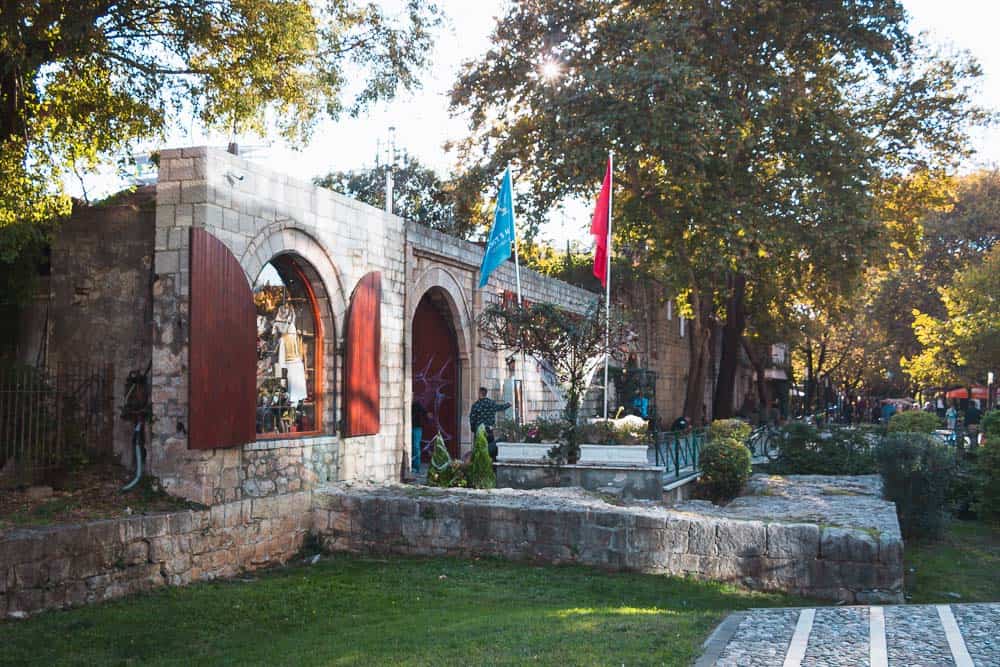 Food, coffee and souvenirs are available at Tirana Castle.

The castle in the old town of Tirana dates back to the Byzantine Empire.

Most of what you see today dates back to the Ottoman Empire. Don’t expect a typical knight’s castle or oriental castle with exhibition in Tirana Castle.

It is now more of a meeting place in the city with cafes, bars and restaurants between Skanderbeg Square and the Pazari (Bazaar).

If you want to go out to eat, you will find restaurants with all kinds of national cuisine within the old city walls – from typical Albanian to Italian.

There are also some handicraft shops with typical Albanian goods. If you are still looking for a souvenir, Tirana Castle is also a good place. 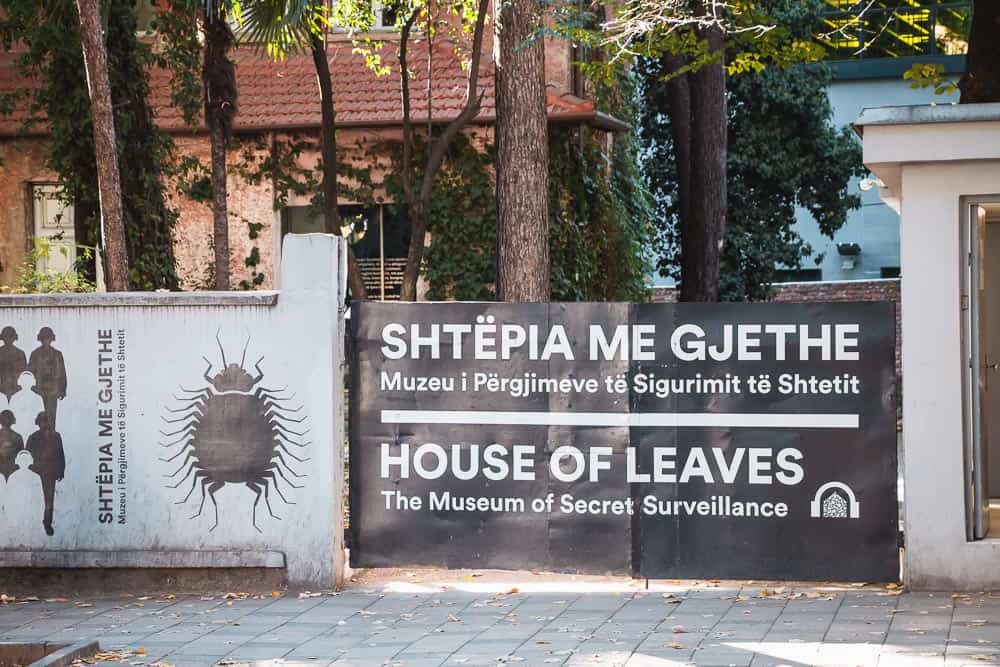 Remembering the horrors of the second world war between WWII and 1991.

The House of Leaves is the equivalent of the Stasi headquarters in the former GDR.

The name House of Leavs has a double meaning. It’s about things hidden in the forest and names on the pages of the files of the Albanian communist secret police.

Are you curious what the spies were up to in the headquarters of the notorious secret police, the House of Leaves shows everything.

But I have to warn you. The exhibition is not for a bad stomach.

In the house you see the worst sides of the dictatorship in Albania, with the history of thousands of persecuted people who were against the regime. 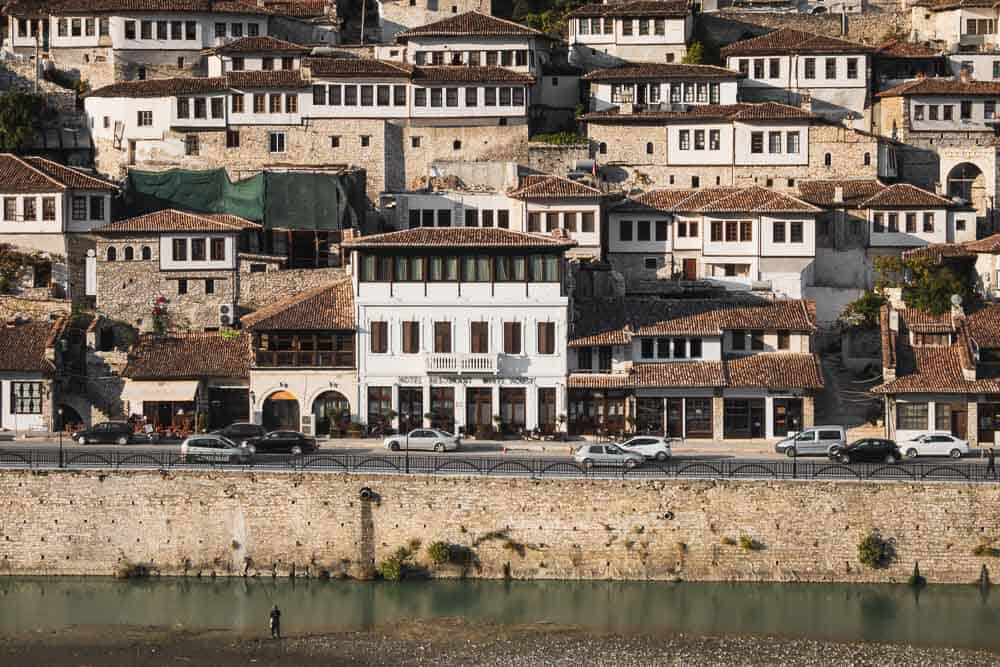 Berat “City of 1001 Windows” It is the most famous sight in Albania.

Berat is Albania’s most famous attraction.

The houses in the old town of Berat from the Ottoman period are part of the UNESCO World Heritage together with the castle.

Images of Berat’s “1,001 Windows” are one of the most frequently seen motifs from Albania. You see photos from Berat more often than from Tirana, the port cities and beaches of Albania.

Still, Berat is not overcrowded and you can see the city with a day trip from Tirana.

You drive to Berat from Tirana with a small group, usually three or four people in a car. You will see the castle, the old churches, the market and of course the old Ottoman houses of Berat.

More on that: I’ll write a separate post with my experiences on the tour from Tirana to Berat. 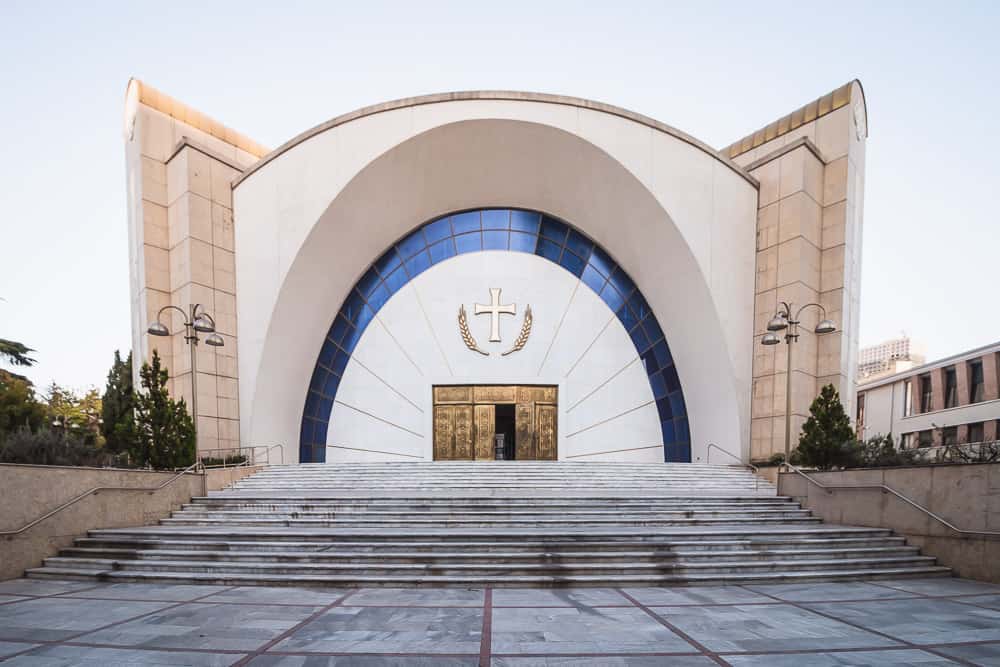 The Cathedral is the new center of the Orthodox Christians in Albania.

Like all religions, the Orthodox Church in Albania went through a difficult period after World War II.

The Resurrection Cathedral, built in 2002, is the new center of the Albanian Orthodox Church.

It stands between Skanderbeg Square and the House of Leaves.

Entry to the cathedral is free. Keep in mind that you shouldn’t dress too revealingly in Orthodox churches either. Your shoulders should be covered in the cathedral. 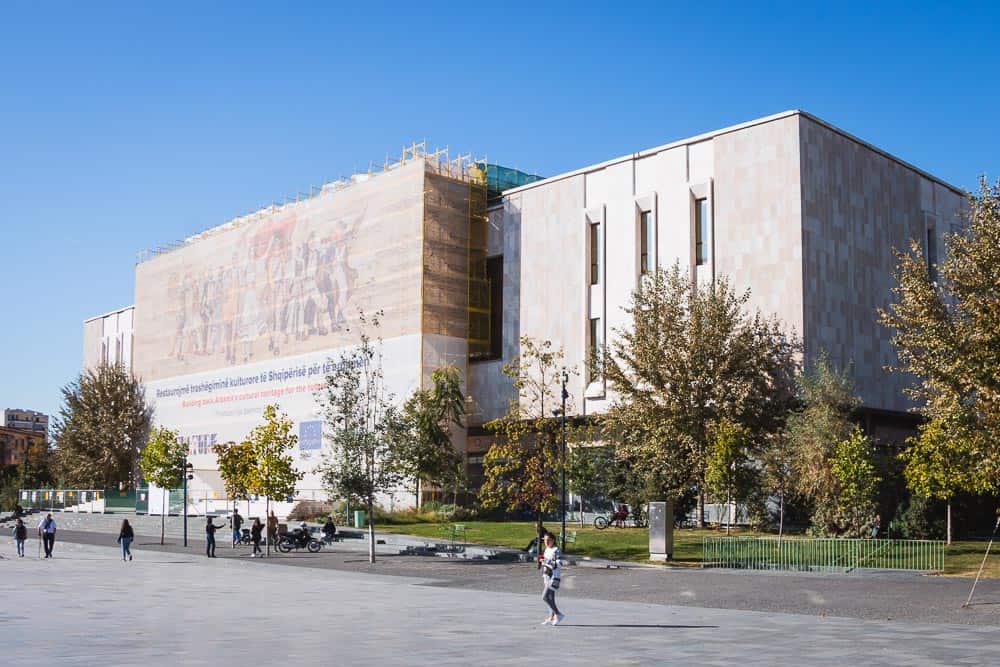 The National History Museum shows you the history of Albania.

The historical museum dates from the time of the dictatorship.

Standing on Skanderbeg Square, it depicts Albanian history from ancient to modern times.

The exhibition includes finds from the ancient sites of Albania, from the medieval castles and from the Albanian National Movement.

The museum also shows the Albanian resistance in World War II and commemorates the mass murders under the communist dictatorship.

If you want to learn more about Albania, the museum is the best place to do it.

Plan an afternoon for the museum if you are very interested, or at least an hour or two. 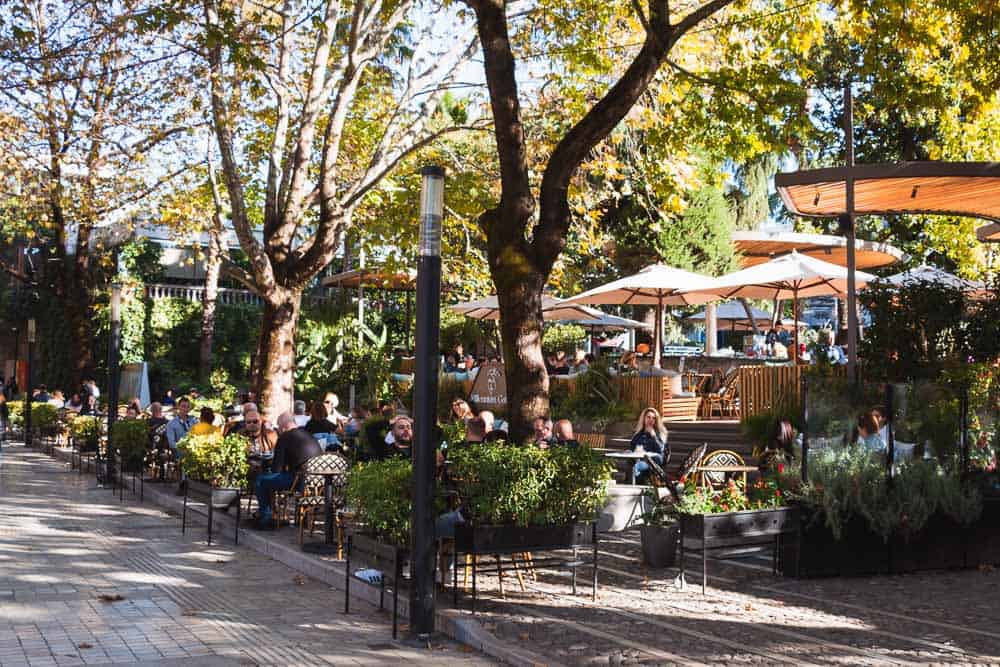 Garden of a cafe: A trip to Tirana is not possible without coffee.

There is one coffee house for every 152 inhabitants in Albania.

That’s the world record. No other country has more coffee houses than its population.

A coffee is part of a city trip to Tirana.

You can find good cafes around Skandenbeg Square, at Pazari (Bazaar) and in Tirana Castle.

Sit down, order a coffee, maybe the oriental kind, with an ibrik and eat it with a donut, a piece of baklava or a cake. 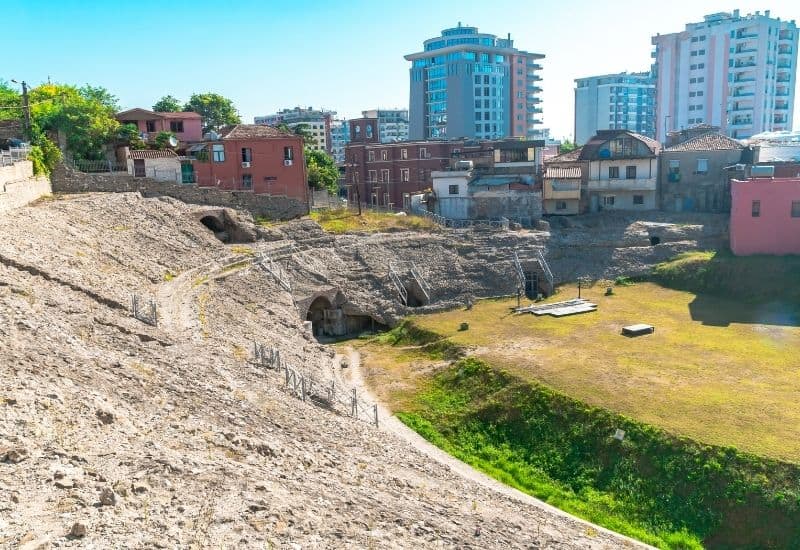 Durres is a port city with beaches, ancient ruins and nightlife near Tirana.

Durres is a port city 40 km from Tirana with miles of sandy beaches, Roman ruins, a seafront promenade with bars, clubs and restaurants.

You can reach Durres from Tirana by bus or directly from Tirana Airport by bus. There is no reasonable train from Tirana to Durres because the Albanian railways have fewer and fewer connections.

If you are planning a long weekend in Tirana, you can go to the beach in Durres for a day and lie comfortably in the sun there.

Durres is among the top 10 sights in Albania that you can easily see from Tirana.

Read more: 16 Most Beautiful Sights in Albania You Must See! 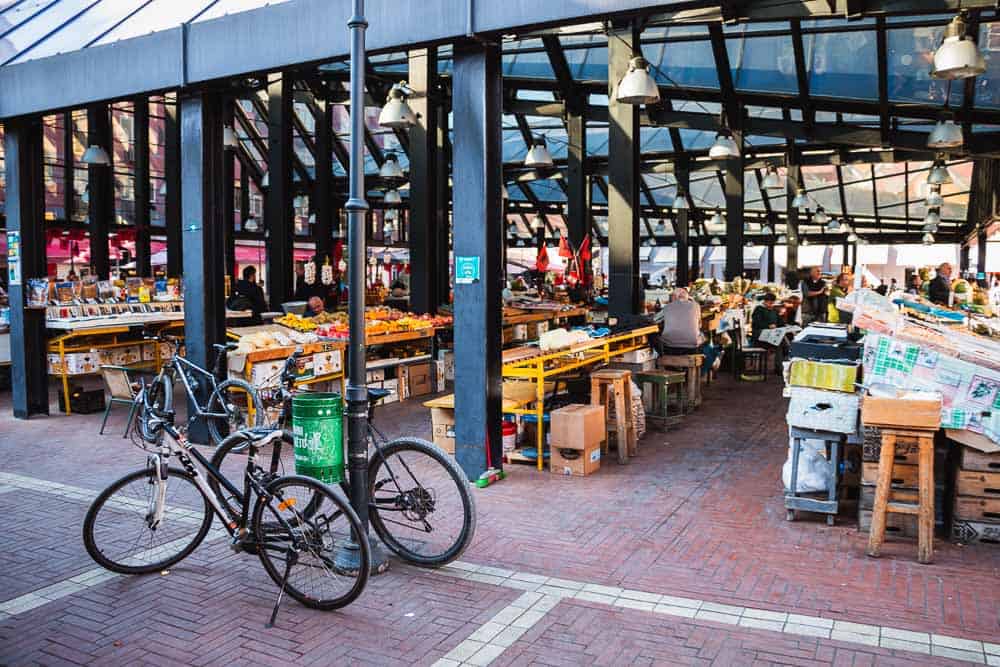 Pazari is a modern market and nightlife district.Pazari i Ri is a district of Tirana.This means the area east of Skanderbeg Square.

The name comes from bazaar in the quarter. Its roots go back several centuries. Even after World War II, merchants in the market continued to sell their wares in the bazaar, even though it was forbidden. Unfortunately, there are no historical market buildings that have been preserved.

The small market has been renovated since 2017. The stalls have a roof, there are souvenirs, food and souvenirs from Albania.

The cafes, restaurants and bars around the market are interesting. The area belongs to the nightlife districts of Tirana because of them.